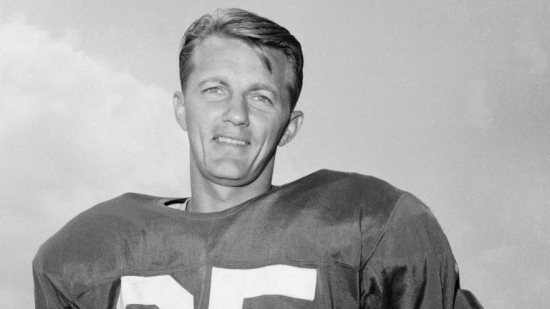 It was announced today that Del Shofner passed away in his home.  He was 85 years old.

Playing his college ball at Baylor, the Los Angeles Rams chose Shofner with the 11thpick overall in the 1957 Draft.  Shofner was used mostly as a Defensive End as a rookie, but he would play a lot more on the offensive side of the ball afterward.  He would be a First Team All-Pro in both 1958 and 1959 and won the Receiving Yards Title in the former year with 1,097 Yards.

Shofner joined the New York Giants in 1961, and that year, and the two seasons after he was a First Team All-Pro. In all three of those campaigns, he would break the 1,000 Yard mark.  He would go to five Pro Bowls over his career.

Shofner retired in 1967 and would accumulate 6,470 Yards with 51 Touchdowns.  He is ranked #78 on our latest list of those to consider for the Pro Football Hall of Fame.

We here at Notinhalloffame.com would like to extend our condolences to the friends and family at this time.

More in this category: « Our All-Time Top 50 Pittsburgh Penguins are now up The Rock and Roll Hall of Fame ceremony has been postponed »