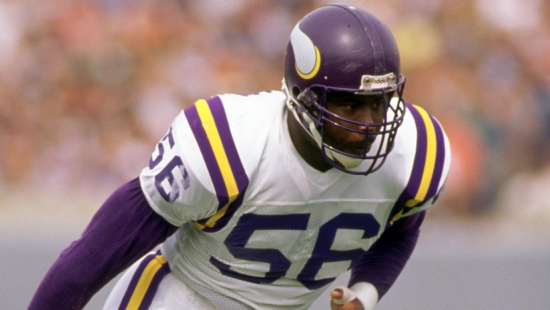 This is not the kind of news that you want to wake up to.

Chris Doleman passed away at the age of 58 after a battle with glioblastoma.

Doleman played his college ball at the University of Pittsburgh, and the Defensive End would be chosen fourth overall in the 1985 Draft by the Minnesota Vikings.  He would to his first Pro Bowl 1987, and would lead the NFL in Forced Fumbles with six.  Doleman was a Pro Bowler in the next three seasons, the best of which being the 1989 season where he was a First Team All-Pro and would finish atop the Quarterback Sacks list with 21.0.  He played for the Vikings three more seasons, and would earn two more Pro Bowls and in 1993 would be chosen for his second First Team All-Pro.

Next up, was Atlanta, where Doleman played two seasons, and then three with San Francisco.  In both teams, he would secure one Pro Bowl season.  He returned to the Vikings for one final season in 1999.

Doleman would be elected into the Pro Football Hall of Fame in 2012, and he is a member of the 1990s All-Decade Team.