A look at the Drew Pearson snub 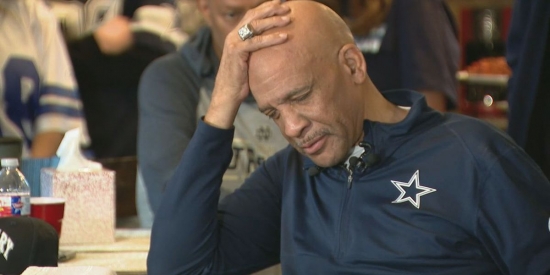 When the Pro Football Hall of Fame announced the 10 new members from the player’s senior pool, that meant that 10 former legends were left off.  While there was a sizable groan in the Rocky Mountains when former Bronco, Randy Gradishar was left off, the most “visible” one was in Texas, as former Cowboys Wide Receiver, Drew Pearson, was also left off.

We use the word “visual” because KTVT from Plano, Texas was on hand to record his reaction.  When he wasn’t chosen, Pearson could not contain his disappointment:

Pearson is referring to the broadcast on the NFL Network, which began at 7 AM EST.  While most people did not expect that they would go right into the announcement of who was chosen, nobody thought that the inductees would be announced in a reality show format, that dragged across nearly two hours.  The NFL Network did not state at the beginning that the announcements would be spread out over such a long duration of time.  The agony for those not chosen, and the families thereof, had to be excruciating.

“Can’t do nothing about it. Can’t catch no more damn passes. Can’t run no more routes.  It’s there.  What upsets me more is when they say you don’t deserve it.  They talk negative about you.  There’s nothing negative about my career in the NFL. Nothing!”

If we were to hazard a guess as to when the mood of the room changed, it had to be when fellow Wide Receiver, Harold Carmichael was announced to the Hall.  He wasn’t just announced on the NFL Network, he was there on hand to discuss the selection.  If he was there, he was obviously told ahead of time, and Pearson and all of the others in that room had to feel that their chances just plummeted.

While Pearson may have taken a chance having his reaction filmed live, there was no reason that he would have thought the broadcast would announce the new inductees in that staggered pattern.  None of us did.  This had let to minimal speculation that Hall of Fame President, David Baker, has been milking camera time and exposure for the Hall.  That train of thought began when he appeared on both the CBS and FOX playoff broadcasts to tell Bill Cowher and Jimmy Johnson respectively that they were now Hall of Famers; leading to some feeling that they earned that spot over Don Coryell and Tom Flores, who had previously been Finalists.  Cowher had not.

Dallas was not without representation as former Safety, Cliff Harris, was chosen.

All of this has left some with a bad taste in their mouth, but we again want to reiterate that we are thrilled that we are watching the biggest Pro Football Hall of Fame Class ever, and that is the most positive Hall related news in years.

Good or bad, we know we will keep wathing.