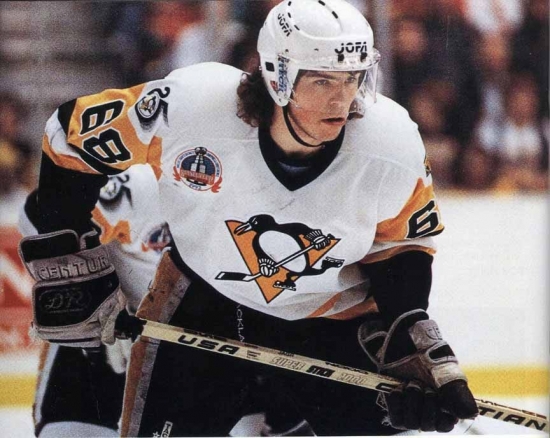 Placing Jaromir Jagr only at number three seems so strange considering all that he accomplished there, but don’t think of this as a slight on Jagr. We ask you to view it as a testament to what Mario Lemieux and Sidney Crosby accomplished over their careers, and Jagr was only with Pittsburgh for roughly half of his career.  But what a half it was!

Jagr would make history as the first Czechoslovakian drafted who did not have to defect, and he was able to join the Penguins immediately.  It didn't take long for him to become one of hockey's most must-see players, and he got a lot of exposure early on the Mario Lemieux led Stanley Cup Championship teams of 1991 and 1992.  In the strike-shortened 1994-95 season, Jagr blossomed to the elite as he would win the Art Ross Trophy and secure his first of what would be six First Team All-NHL Selections.  From 1997-98 to 2000-01, Jagr captured the Art Ross trophy annually peaking with the coveted Hart Trophy in the 1998-99 campaign.

Sadly for the Penguins fans, Jagr looked for greener pastures and requested a trade, and in the summer of 2001, the Czech superstar was traded to the Washington Capitals in a move that saw little in return.

As of this writing, Jagr has the most Points of any player from Europe and is second all-time.  1,079 if his 1,921 Points came as a Penguin and there is no doubt that when you think of him in the NHL, it is Pittsburgh (and that mullet he used to have).