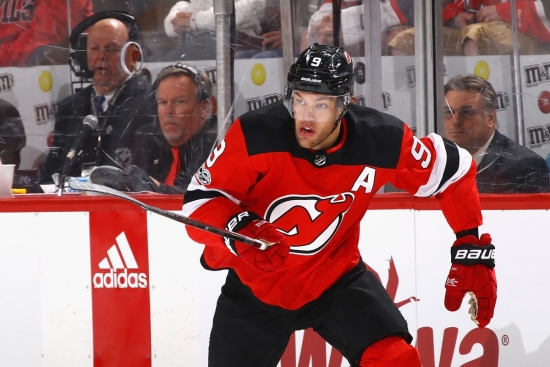 With every top 50 list we do for a major sports team, we always have one who is a complete struggle to rank.  For the New Jersey Devils, that player is Taylor Hall.

Hall was the number one pick in 2010, and he scored 328 Points in 381 Games for the team that took him, Edmonton.  He didn't reach the level that the Oilers hoped, and he was traded to New Jersey before the 2016-17 Season.  The Left Wing had 53 Points that year but jumped that to 93 in 2017-18, his best ever, and one that earned him a First Team All-Star and the coveted Hart Trophy, making him the first Devil to earn that accolade.

That last sentence is enormous on a list like this.  We are telling you what you already know, but winning the Hart means you are considered the best hockey player in the world and the Devils had one. So then why is Taylor Hall not a top-ten player on this list?

Hall only had 55 more Points for New Jersey, though that was due to missing more than half of the 2018-19 Season because of injury and being traded to Arizona late in the 2019-20 Season as his contract was due.  Hall was unlikely to resign with New Jersey, and upon season's end, he joined the Buffalo Sabres.

The Left Wing played only 211 Games for New Jersey, with six Playoff Games, but he averaged .99 Points per Game and is a Hart winner.