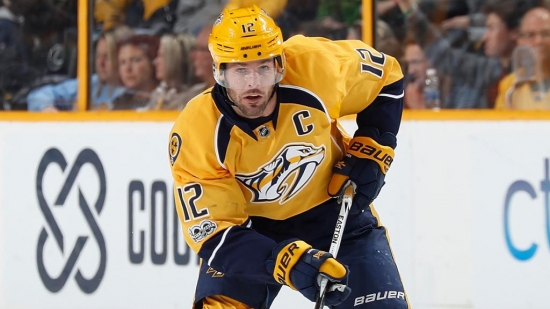 Far more than the husband of Country icon, Carrie Underwood, Mike Fisher cut his teeth in the NHL with the Ottawa Senators, a team he played 11 years for.  Fisher was never Ottawa's best player, but he was a bona fide leader who was a solid two-way player and a key figure in their Stanley Cup Final in 2007. The Senators missed their window, and Fisher was traded to the Nashville Predators in the 2010-11 Season, who was thrilled to get his veteran presence.

With Nashville, Fisher approached his personal best, a 51-Point year in 2011-12, two Points shy of his best mark.  Fisher was not a player that would make an All-Star Game, but the way he left everything out there on the ice earned him the 2012 Foundation Player Award.  This unique accolade is given to the player "who applies the core values of hockey – commitment, perseverance, and teamwork to enrich the lives of people within the community."  If this wasn't a perfect honor for Fisher, we don't know what it is!

Fisher would have two 40-Point plus years with the Preds, and his presence was instrumental in their run to the Finals in 2017.  Age caught up with Fisher, who temporarily retired after the Finals but came back for one more year before calling it quits for good in 2018.

As a Predator, Fisher scored 241 Points.