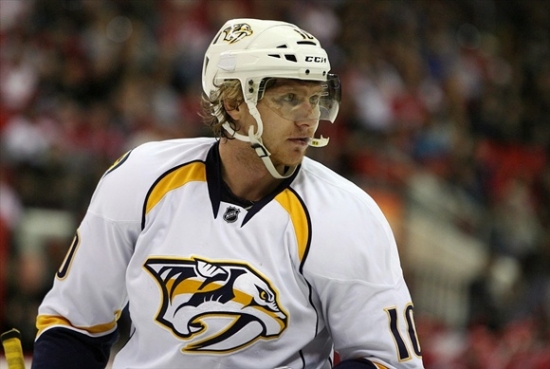 The more we do this, the more we view the NHL Amateur Draft as a mystery.  Constantly, there are First Round Pick who never make it to the big dance, and there are mid-to-late Round Picks who have long careers, and Martin Erat fell into the latter category.

The Nashville Predators chose Erat 191st Overall in 1999, and the Right Wing from the Czech Republic made the team two years later.  Erat’s rookie year was decent (33 Points), but he struggled as a sophomore, so much so that he was demoted to the AHL for most of the year.  With the sophomore slump in his rearview mirror, Erat was set to be an established NHL player.

Erat had 49 Points in 2003-04 and repeated that in 2005-06, the year after the NHL Lockout.  He would again replicate Point outputs, this time of 57 in 2006-07 and 2007-08, and Erat would have at least 49 Points over the next four seasons.  Erat was not a top line player but a strong second line player and a valuable commodity to the Predators when he played there.

After he turned 30, Erat was traded to Washington.  As a Predator, Erat accumulated 481 Points in 723 Games.