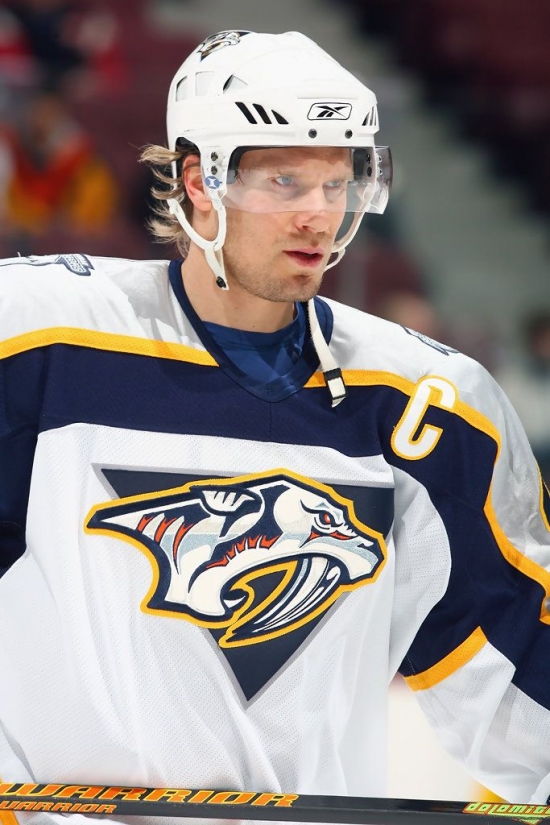 A late round pick by the Los Angeles Kings in 1993, Kimmo Timonen continued to play in his native Finland for a few years, but when he decided to try his luck in the NHL it was with the Nashville Predators, who traded for his rights.

The Defenseman split his first North American year between Nashville and their AHL affiliate, Milwaukee, but Timonen proved a commodity worth keeping at the top level of pro hockey.  After a pair of respectable seasons, Timonen put forth three consecutive 40 Points seasons, culminating with his first All-Star Game in 2004.

The NHL locked out their players in the 2004-05 due to a labor disagreement, but Timonen’s skills continued to improve.  When play resumed, Timonen had his first 50-Point Season, which he followed up with what would be his career-best 55 Points in 2006-07.  Timonen would go to his second All-Star Game, and was fifth in Norris voting.

Timonen’s stay in Nashville ended when the Preds traded him and Scott Hartnell for a 2007 First Round Pick, who turned out to be Jonathon Blum, who never played a game in the NHL.  In 2015, his final NHL year in the NHL, Timonen aided Chicago in winning a Stanley Cup.