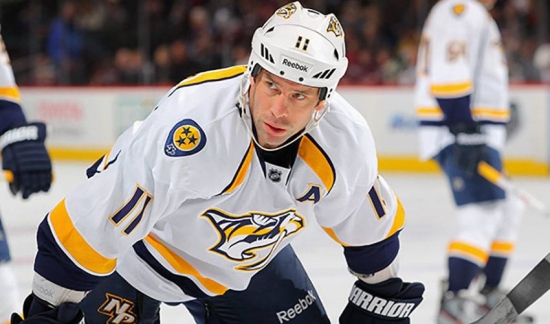 In 1998, the Nashville Predators made David Legwand the first ever Draft Pick in team history, and in terms of longevity and character, it was an A+ all around.

The American-born Center spent his first year in the minors (save for one Game), and while he never had the skills to be a first line Center in the NHL, he was a workhorse who provided consistency to Nashville for years.  Legwand was a regular in his second pro year, and while his peak scoring year was a respectable 63 (2006-07), he had seven other seasons where he achieved at least 40 Points in a year while wearing a Predators uniform.  He would also appear on the penalty kill often.

The Preds only made the playoffs four times while Legwand played there, but considering they were an expansion team, this was no reflection on Legwand.  He was traded to Detroit during the 2013-14 Season, and he is still the all-time franchise leader in Games Played (956), Goals (210), and Points (566).