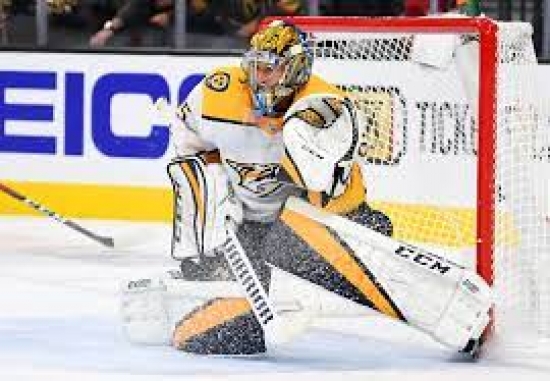 Pekka Rinne was an afterthought in the 2004 NHL Draft, where Nashville took the Finnish Goalie with the 258th Overall Pick.  For a "throwaway," Rinne is to date the best Predator Goalie of all time and likely will be for years.

In the 2010-11 Season, Rinne had his breakout campaign, with a 2.12 GAA that won him a Second Team All-Star, a runner-up for the Vezina, and a fourth place finish in the Hart Trophy.  Rinne was now an upper-tier Goalie, and this was not a one-year aberration.

Rinne led the NHL in Wins (43) and Saves (2,153) in 2011-12, with a 2.39 GAA, and he was third for the Vezina.  Rinne's next two years were a step back, but he rebounded with another Vezina runner-up year (2014-15), with a Stanley Cup Finals appearance two years later.  It was evident that with Rinne in the net, Nashville had the building block from the end.

The Predators went to the Stanley Cup Finals in 2017, and Rinne was incredible to get them there and had they beat Pittsburgh, he would have won the Conn Smythe Trophy.  They didn't, but his accomplishments should never be forgotten.  Rinne finally won the Vezina the year after, proving his backstopping prowess as a top hockey Goalie.

Rinne finished his career with the Predators, winning the King Clancy Award in 2021, which turned out to be his last season in North American hockey.  Retiring, the Predators announced that his #35 would be retired, earning the Goalie the honor of being the first Predator to have his jersey retired.