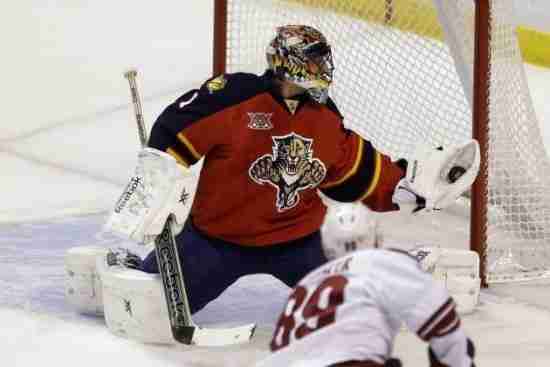 After his rookie year with the New York Islanders, Roberto Luongo was traded to the Florida Panthers with Olli Jokinen in what can be best described as one of the most lopsided trades in favor of the Panthers in their history.  Luongo played more in his first two years in Florida, gradually, acclimating to the faster-paced game and he would ascend to the upper-echelon of NHL netminders.

During the entirety of Luongo's run in Florida, the Panthers were not serious contenders, and much of the success that they did have was thanks to Luongo.  We will argue that his breakout season was in 2003-04, where even though he did not receive any Vezina votes, he led the NHL in Goalie Point Shares (14.4).  Luongo was not to be denied in terms of recognition the season after, as he led the NHL in Saves (2,303) and Goalie Point Shares with a whopping (20.9).  He was awarded a Second Team All-Star and was third in Vezina voting with a sixth-place finish for the Hart.  The year after was almost as good, again leading the NHL in Saves (2,275) and for the third year in a row, GPS (18.5).  Not many Goalies can say that.

Due to contract issues, the Panthers traded Luongo to Vancouver, and as a Canuck, he was still one of the best Goalies in the game and would take them to a Stanley Cup Final.  Seven years later, Luongo was traded back to Florida, and while he was older, he was still competent.  Luongo would have two more seasons with the Panthers where he finished in the top ten in Vezina voting.

Luongo retired after the 2018-19 season, and while he had a losing record as a Panther, Luongo was by far the best Goalie that the Panthers ever had, and one of the best ever.

More in this category: 2. John Vanbiesbrouck »