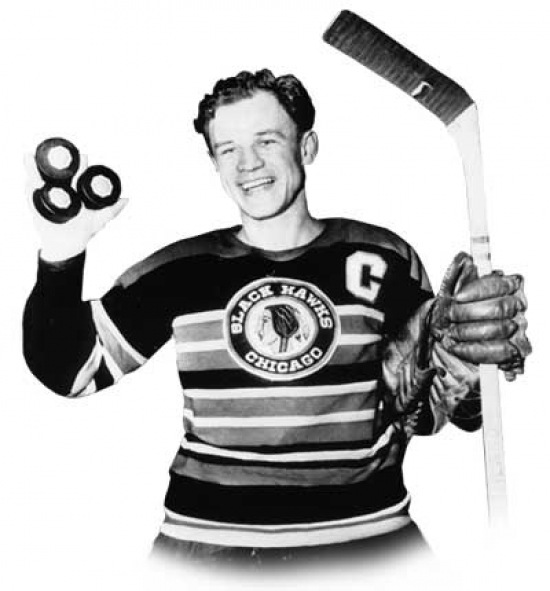 Bill Mosienko would make a relatively quick debut into the National Hockey League at the age of 20 in the 1941-42 season as the events of World War II would deplete the rosters of the premier league of Hockey.  Dubbed “Wee Willie” due to his short stature, Mosienko would blossom in the 1943-44 season with a 70 Point season and the season after would see him paired with the Bentley brothers to form the “Pony Line” a moniker derived from all three of the players being a little vertically challenged.  The trio would become one of the best lines in the NHL, and Mosienko would benefit with a pair of Second Team All Star Selections (1945 & 1946).

A key attribute of Mosienko’s game was his effectiveness to avoid penalties.  Mosienko would win the Lady Byng Trophy in the 1944-45 campaign where he never set his skates in the penalty box.  He would on two more occasions finish third in Lady Byng voting.

The Blackhawks were never a particular potent team when Mosienko played there and as such he would not have the opportunity to play often in the post-season, but he does have one regular season accomplishment that will be very difficult to match.  The five time All Star would in the final game of the 1951-52 season score three goals in 21 seconds.  Nobody has scored a hat trick quicker than Mosienko did and it is difficult to imagine anyone ever coming close.

He would play his entire career with the Chicago Blackhawks and would score 540 Points for the team.

Mosienko would enter the Hockey Hall of Fame in 1965.