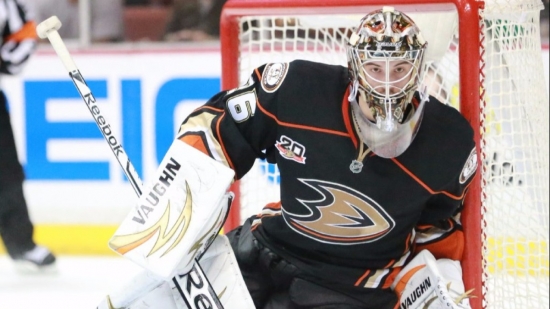 Frederik Andersen played in his native Denmark, playing well enough to earn a Seventh Round Pic by the Anaheim Ducks in 2010.  Three years later, Andersen made his NHL debut with a 23 Game rookie year.

Injuries to John Gibson saw Andersen ascend to the starter in 2014-15, where he won 35 games against only 12 losses. As good as he was, the Ducks coveted Gibson more, and the duo split the goaltending duties in 2015-16.  The tandem was excellent, winning the William M. Jennings Trophy, but with two Goalies deserving of the first spot, Andersen was deemed expendable.

As the Ducks had John Gibson, Anderson was traded to the Toronto Maple Leafs, for a First and Second Round Pick, though neither panned out for Anaheim.  With the Ducks, Andersen had a 2.33 GAA with a sparkling record of 77-26-33.