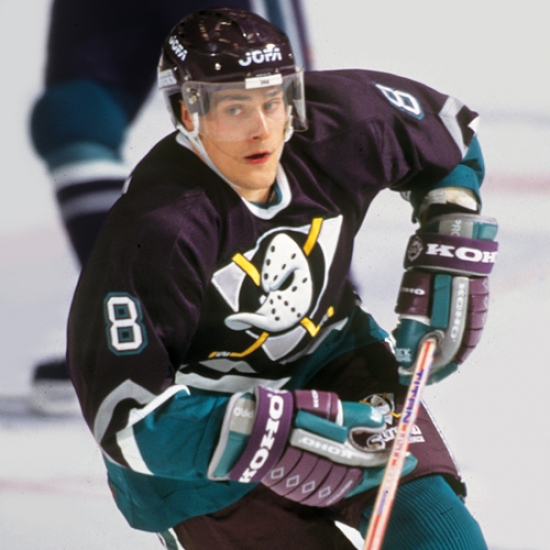 Teemu Selanne was drafted by the Winnipeg Jets in 1988, but he didn't arrive in Winnipeg until 1992, having developed his native Finland skills.  Selanne had 76 Goals as a rookie, and the “Finnish Flash” was a star…who was surprisingly traded during the 1995-96 to the Mighty Ducks of Anaheim.

Selanne never had a 76 Goal season for the Ducks, but new rules and defensive schemes were more of the culprit.  Selanne was still a goal-scoring machine by what was the new standard.  The Right Wing lit the lamp 51 times in Anaheim's first full year, with 109 Points finishing fifth for the Hart, and earning First Team All-Star honors for the first time since his rookie year. Selanne took his new team to their first playoff series and did so again the year after, where he led the NHL in Goals (52) and was third in Hart Trophy voting.  While Selanne’s goal production slipped to 47 Goals in 1998-99, it was enough to again finish first in Goals, winning the first ever Maurice Richard Trophy for the most Goals.  Sadly, that year saw the Mighty Ducks fail to make the playoffs, and after the team’s poor start in 1999-00, Selanne was traded to San Jose Sharks before the trading deadline. This, however, would not be the last time that Selanne played in Southern California.

After two full years in San Jose, a season in Colorado, and one back in Finland during the 2004-05 lockout, Selanne signed with Anaheim as a Free Agent in 2005. Selanne scored 90 Points, which was his best season in years, and he won the Bill Masterton Award.  Anaheim was a more complete team, as he took the Ducks to a Conference Final, and the season after, at age 36, he scored 94 Points and led the NHL in Power Play (25) and Game-Winning Goals (10).  Finishing ninth in Hart Trophy voting, Selanne and the Ducks won the Stanley Cup, the first for both parties.

More in this category: 2. Ryan Getzlaf »