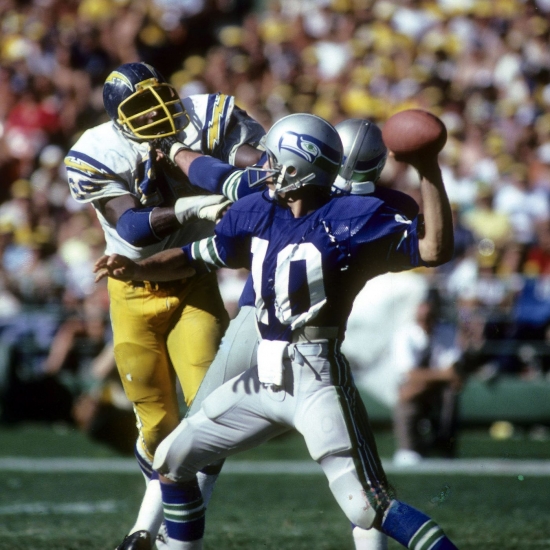 Jim Zorn went undrafted in 1975 out of Cerritos College, but the Dallas Cowboys gave him a shot but cut him before the season started.  The Los Angeles Rams tried him out, but that did not work out either.  1976 would be a different story, as he was signed by the Seattle Seahawks, who were an expansion team, and not only would he make the roster, he became their starting Quarterback.

Seattle did not do well in 1976, but Zorn was decent and was named an All-Rookie.  As the team tried to evolve, Zorn was more of a gunslinger, and in Seattle's third and fourth season of existence, they went 9-7, with Zorn throwing for more than 3,000 Yards each year.  In both of those campaigns, Zorn had an Approximate Value of 17, which was good enough for first and second in those years.  Zorn had another 3,000 Yard Passing year in 1980, making three in a row, and these were good numbers for the day.

In 1983, he lost his starting job to Dave Krieg, and he remained with Seattle as a backup before he signed with Green Bay as their number two QB.  Zorn would have 20,122 Receiving Yards with a 107-133 TD-INT record for the Seahawks.  He also had 17 Rushing Touchdowns and was considered an above-average scrambler for his era.