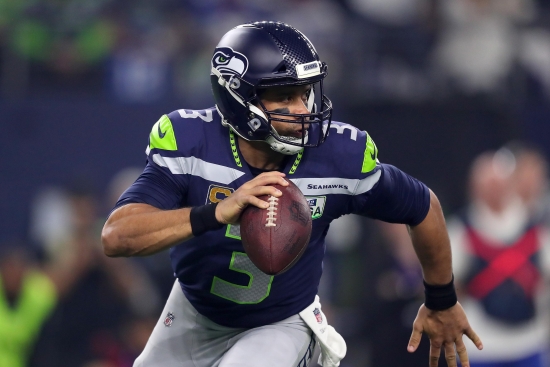 Since his arrival to the Emerald City, Wilson was not only one of the most talented Quarterbacks in the NFL, and he was one of the most exciting.  He would win the starting job in training camp, and not only did he win the ROY, but he was also named to the Pro Bowl, an accolade he would repeat five more times.

The Seahawks had been to the playoffs before Wilson arrived, but with the multi-talented pivot, they were able to win Super Bowl XLVIII, and they returned the following year, losing a nail biter to New England.  Always the owner of a phenomenal Passer Rating, Wilson led the league in that stat in 2015, and he is presently second all-time in that stat.  Two years later, Wilson finished first in Touchdown Passes.  As long as Wilson is the Seahawks' QB, the team is always in games and playoff contention.

As of this writing, Wilson is without question the best QB in franchise history and owns a sparkling TD-INT record of 267-81.  It is hard to imagine that that when his career is all said and done that Canton won't call him up.  The seven-time Pro Bowler overtook Jones and Largent in our eyes for the top spot, though barely.  All three are legends in our eyes.