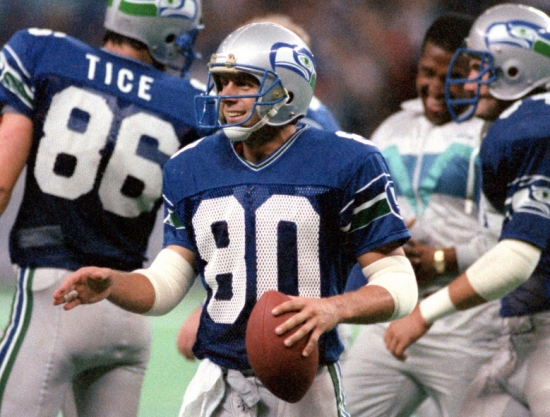 A member of the Seattle Seahawks for his entire career, we were so close to placing Steve Largent at the top of this list.  In the end, we went with Walter Jones, but if you think we erred, we certainly could be talked into flip-flopping the two.

Largent fell to the fourth round after having a great college run at Tulsa, but the team that drafted him (Houston) didn’t see much in him and thought they got a good return on a future eighth round pick, considering they were going to cut him anyway.  This happened during his rookie pre-season, and Seattle arguably stole the player who would become their best Wide Receiver in franchise history.

Never known for his speed, Largent was one of the most sure-handed receivers in the game.  He had 705 Receiving Yards as a rookie, and in 1978 he went to his first of what would be seven Pro Bowls.  In all of those Pro Bowl campaigns, Largent hit four digits in Receiving Yards, and he would also have the eighth one.  Largent would also lead all receivers in Yards twice (1979 & 1985), with the latter year earning him a First Team All-Pro.  It is also worth mentioning that Largent won the Walter Payton Man of the Year in his penultimate season.

In 1992, Largent would become the first player to have his number retired by the team.  He would be inducted into the Pro Football Hall of Fame in 1995 and was also named to the NFL 100th Anniversary Team.