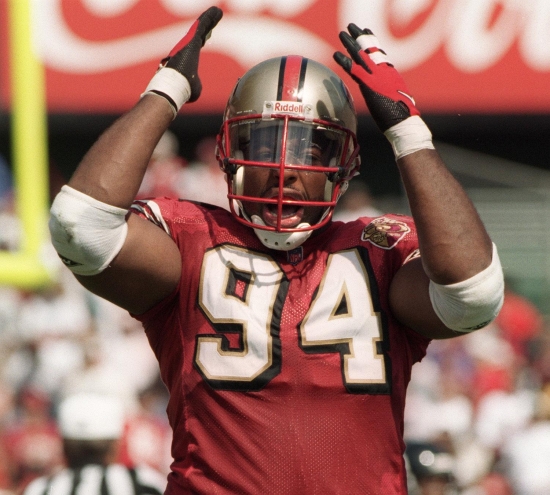 Dana Stubblefield made an impact after being taken 28thOverall, in 1993, the former Kansas Jayhawk won the Defensive Rookie of the Year with a 10.5 Sack season.

The Defensive Tackle was actually better in the two years after, as even though his sack totals went down, he was a more complete player, with back-to-back Pro Bowls (1994 & 1995) double-digit Approximate Value years.  Stubblefield also helped San Francisco win Super Bowl XXIX.  After a productive 1996 campaign, Stubblefield put forth his best year in football.  With a career-high 15 Sacks and 17 Approximate Value, Stubblefield had his third Pro Bowl, first (and only) First Team All-Pro, and was the Defensive Player of the Year.

Stubblefield left for the Washington Redskins for three years, returning to the 49ers for two years, though he was not the same player he was in his first run.

With San Francisco, Stubblefield had 46.5 Sacks.