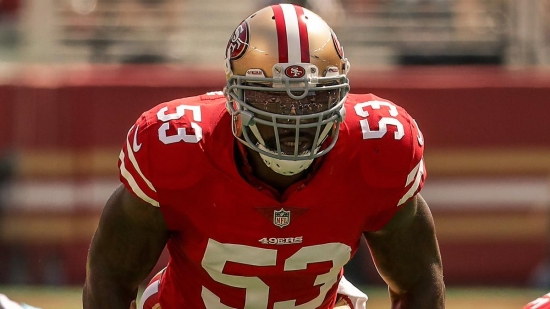 NaVorro Bowman was a star at Penn State, translating into a Third Round Draft Selection by the San Francisco 49ers.

Playing at Linebacker, Bowman was a backup as a rookie but would be the 49ers starting Left Inside Linebacker the year after, where he earned a First Team All-Pro and had an 18 In Approximate Value.  Bowman had at least 140 Tackles that year, and would again in 2012 and 2013, both of which would be First Team All-Pro years.

Bowman suffered a major setback in 2014 as he missed the entire season from a knee injury, but he made a full comeback in 2015, leading the NFL in Combined Tackles (154), Solo Tackles (116) and secured his fourth First Team All-Pro nod.  Bowman was limited to four Games in 2016 due to an Achilles issue, and after a slow start where he was benched, Bowman asked for a trade.  When one was not available, he was released, and he finished his career with the Oakland Raiders.