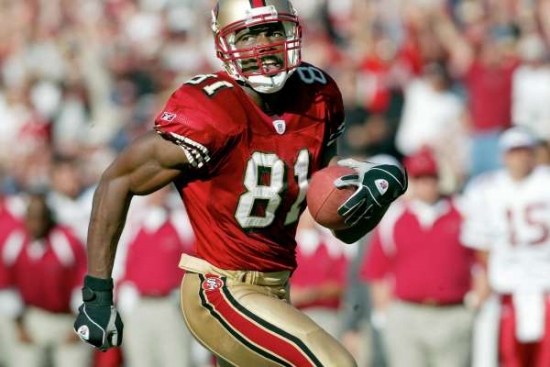 From Chattanooga, Terrell Owens was drafted in 1996’s Third Round by the San Francisco 49ers, and he found out quickly that his talents were worthy of the National Football League.

Owens did well in his first four seasons in the league, but he was clearly behind Jerry Rice in the pecking order.  In 2000, Owens became the man in terms of Wide Receivers in San Francisco.  That season, he set (a since broken) record with 20 Receptions in a game, and he had 1,451 Receiving Yards (his personal best) with 13 Touchdowns.  Owens led the NFL in Receiving Yards per Game (103.6), and he as a Pro Bowl and First Team All-Pro for the first time in his career.

T.O. flourished as the lead WR in San Francisco, as he was a First Team All-Pro again the next two seasons with yardage of 1,412 and 1,300, respectively.  In both of those years, he led the league in Touchdowns (16 and 13), and from 2000 to 2002, Owens was regarded as the best Wide Receiver in the NFL.  He played one more season with the 49ers, going to his fourth Pro Bowl when he had 1,102 Receiving Yards.

As would become typical with Owens, he became disgruntled with his team, and he openly wanted to leave the Niners. He was not enamored with their new coach, Dennis Erickson (Erickson replaced Steve Mariucci), and his antics with his ex-Quarterback, Jeff Garcia, became tiresome. San Francisco traded him to Baltimore after the 2003 Season, but Owens believed he was a Free Agent.  Owens would have been, but his agent missed the deadline to void his contract's final year.  Owens signed with Philadelphia, and an arbitrator worked out a deal allowing Owens to leave.