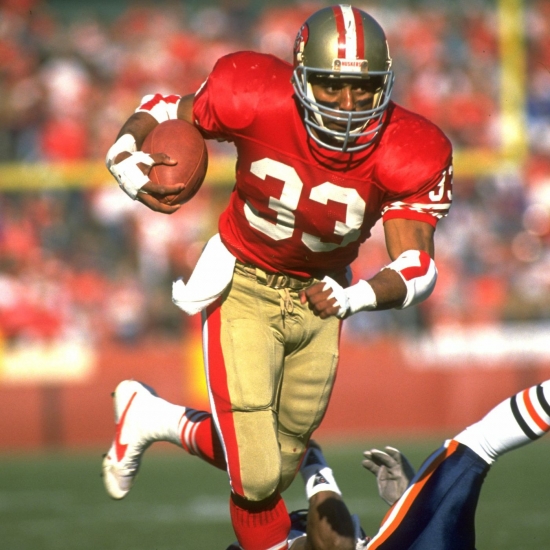 There have many Running Backs who were equally capable of the receiving game, but there can only be one groundbreaker.  That man was Roger Craig.

A Second Round Pick from Nebraska in 1983, Craig quickly became the Niners’ starting Running Back, and in his first two seasons, he recorded 1,000-yard plus seasons in Yards From Scrimmage.  Craig helped San Francisco win the Super Bowl in 1984, and in the first two seasons of his career, he had 119 Receptions, which was an echo of what was to come.

In 1985, Craig made history becoming the first player to have over 1,000 Yards Rushing and 1,000 Yards Receiving.  He led the NFL in Receptions (92), and he went to his first Pro Bowl, and while he wasn’t named a First Team All-Pro, he became a standard-bearer of what a dual-threat Running Back could become.

Craig continued to have good seasons in 1986 and 1987, where he was a Pro Bowler again, and in 1988, he had the best year of his career.  Craig had a career-high 1,502 Rushing Yards, and his 2,036 YFS led the NFL.  He was named the AP Offensive Player of the Year and the NEA MVP and helped lead the Niners to their third Super Bowl win.  Craig was a Pro Bowler again in 1989 and was also a vital cog in the San Francisco machine that won their fourth Super Bowl (third for Craig).

Craig played one more year in San Francisco before he signed with the Los Angeles Raiders in 1990.  With the 49ers, Craig accumulated 7,064 Rushing Yards, 4,442 Receiving Yards, and 66 Touchdowns.  The 49ers inducted Craig into their Hall of Fame in 2011.