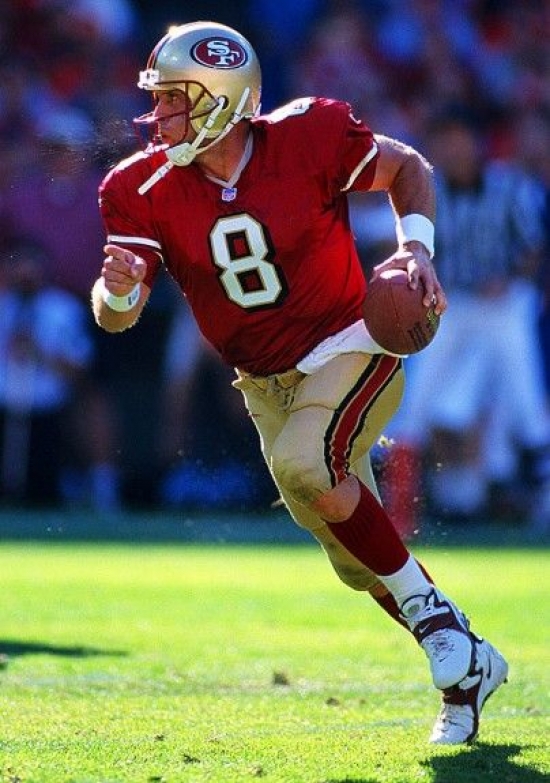 We were not conflicted in making Jerry Rice the greatest player in the history of San Francisco 49ers.  As for who came next, it was not as simple.

Actually, the real question was which Hall of Fame Quarterback would be next, Steve Young or Joe Montana.  As you have easily deduced, we decided on Montana, but it was a last-minute decision.  It was paper-thin close.

Young was an All-American at BYU, and before the NFL Draft, he signed with the L.A. Express of the USFL, and when that league folded, he signed with the Tampa Bay Buccaneers, who had his rights from the Supplemental Draft.  Young's time with the Bucs was not successful, as he only won three games in two years, and the team was horrendous.  He was traded to San Francisco to be Joe Montana's understudy, as Tampa took another QB in the Draft, Vinny Testaverde.

Young was the number two pivot in San Francisco for four years, but he was given chances to play, and he shined in every opportunity.  When Montana went down to injury in 1991, Young took over, and in 11 Games he threw for 2,517 Yards for 17 T.D.s and a league-leading Passer Rating of 101.8.

When the 1992 season began, Young was now the 49ers Q.B., as Montana was still hurt, but on the road to recovery.  While it was speculated that Young might be traded (the Niners had another Q.B. in Steve Bono who looked like a future starter), he erased any doubt by playing at a level that made him impossible to replace. Young was a Pro Bowl and First Team All-Pro for the first time, and he led the NFL in Completion Percentage (66.7), Touchdown Passes (25), Passer Rating (107.0), and Approximate Value (22). He would win the AP MVP, NEA MVP, PFWA MVP, Bert Bell Award, and the Offensive Player of the Year.

In 1993, Montana was traded to Kansas City, and Young no longer had to look over his shoulder.  He took the Niners to their second straight NFC Championship, though again, they lost to Dallas.  Young had a First Team All-Pro again, and he led the NFL in Touchdowns (29), Passer Rating (101.5), and Approximate Value (23).  That was good, but it was going to get better in 1994.

A First Team All-Pro for the third year in a row, Young again was atop the leaderboard in Pass Completion Percentage (70.3), Touchdown Passes (35), Passer Rating (112.8), and Approximate Value (23), and he won the three MVPs and Bert Bell Award.  This time they beat Dallas in the NFC Conference Finals, and they went on to crush the San Diego Chargers in the Super Bowl, where Young won the Super Bowl MVP.

This was his apex, but not the end of his greatness. Young was a Pro Bowler in all of his First Team All-Pro seasons, and he would have four more from 1995 to 1998. In that timeframe, Young had three more Pass Completion Titles, two Passer Rating Titles, and one Touchdown Pass Title.

Young’s career ended in 1999 after a concussion and the following post-concussion syndrome.  As a Niner, Young had 29,907 Passing Yards and a TD-INT Ratio of 221-86, with 3,581 Rushing Yards and 37 Rushing Touchdowns.