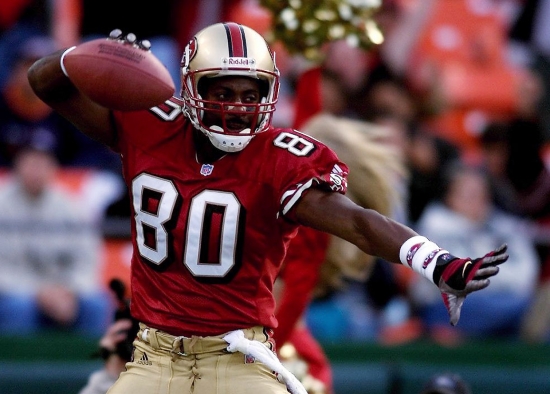 We all know that the San Francisco 49ers have given us multiple Hall of Famers and won several Super Bowls.  Despite that, there is no other man that could be debated as the greatest 49er than Jerry Rice, who is also undoubtedly the best Wide Receiver in the game's history.

An absolute superstar and record breaker at Division 1AA Mississippi Valley State, Rice was the 16thOverall Pick by the San Francisco 49ers in 1985.  Rice was an All-Rookie with 927 Yards, which was a good start but would pale compared to what was to come.

From 1986 to 1996, Rice had without question the best 11 seasons of any Wide Receiver.  Take a look at what he accomplished in that time frame:

In his 1987 Bert Bell Award-winning year (where he also won the NEA and PFWA MVP), he had an incredible 22 TDs in only 12 Games!

Rice did it all.  He was fast, athletic, tough, intelligent, and a brilliant route-runner.  While he was always blessed with great Quarterbacks, they were more blessed to have Rice as their top option.

Notably, as a Niner, Rice also accumulated 1,811 Yards with 19 Touchdowns in 23 Playoff Games.

Rice played for San Francisco until he signed with the Oakland Raiders playing three and a half years there before finishing the rest of his final season with the Seattle Seahawks.  With the 49ers, Rice had 19,247 Receiving Yards and 176 Receiving Touchdowns, both of which are enough to place him first all-time. Remember, this is BEFORE you add the stats from Oakland and Seattle!

Tagged under
Tweet
More in this category: 2. Joe Montana »