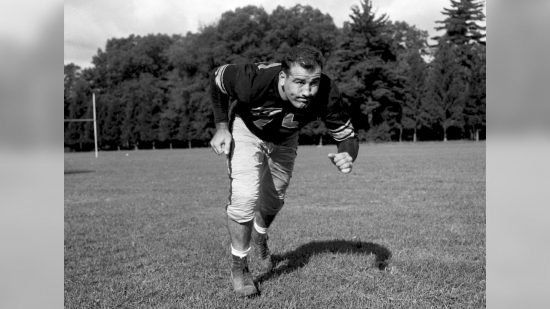 Frank Varrichione had a great career at Notre Dame, where he helped them win a version of the National Championship in 1953.  Two years later, the Tackle was a First Round Pick (Sixth Overall) by the Pittsburgh Steelers.

Varrichione hid for years partial deafness (revealed in 1957, when his helmet would be fitted with a hearing aid), but ailment aside, he was one of the best Tackles of the last half of the 1950s.  He was a Pro Bowler as a rookie and would be again in 1957, 1958, and 1960. The Steelers might not have been contenders when he played, but Varrichione did his job, starting all 72 of his Games at Right Tackle.

Varrichione’s tenure in Pittsburgh ended when he was shockingly traded to the Los Angeles Rams after the 1960 Season.  He would go to one more Pro Bowl as a Ram.