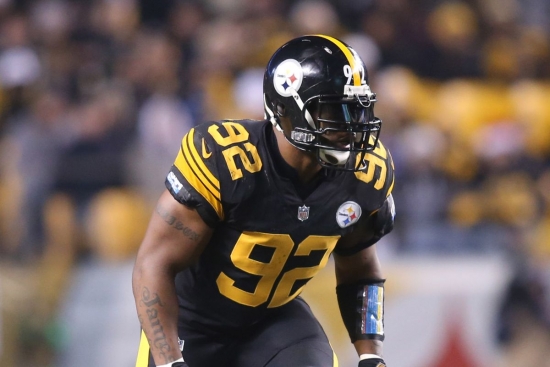 James Harrison's road to professional football stardom with the Steelers was full of potholes.

Harrison was undrafted out of Kent State in 2002, and he was signed and released three times over two years, only playing in one game at Special Teams.  Baltimore then hired the Linebacker, but he never played for them either, and Harrison contemplated retiring for good.  The Steelers called again, but this time he made the team.

From 2004 to 2006, Harrison was a backup and Special Teams player, but in 2007, he won the starting Right Outsider Linebacker job. The man they called “Deebo” (for his resemblance to the character in Friday) put everything together, and the mental gaffes and inability to finish plays were attributes from the past. Harrison would be a Pro Bowl that year, and the next four after that.

In 2008, Harrison had one of the best defensive seasons of a Steeler, and doesn’t that say a lot?  Harrison led the NFL in Forced Fumbles (7), Approximate Value (19), had 16 Sacks, and 101 Combined Tackles.  He was named the AP Defensive Player of the Year, and he would take the Steelers to their second Super Bowl win of the decade.

Harrison, a two-time First Team All-Pro, was released in a budgetary move and joined the Bengals for one season before retiring, but that sabbatical proved temporary.

Harrison returned as an elder statesman with the Steelers, providing depth in the pass-rushing department.  He became the Steelers all-time leader in Sacks, which is a mark he still holds with 80.5.  His end came when he was released during the 2017 season after being a healthy scratch for multiple games, but he signed with the Patriots that year in a chase for another Super Bowl, with New England made, but did not win.

In addition to his 80.5 Sacks, Harrison had 11 Sacks and 82 Combined Tackles in the Steelers' playoffs.