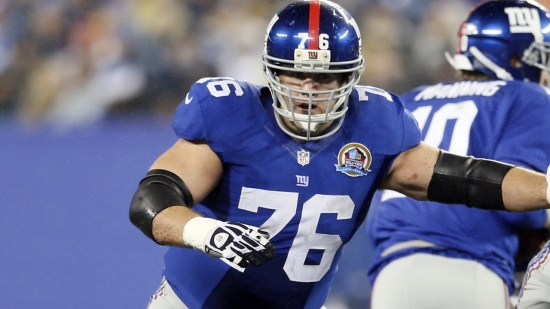 Playing for your dad is hard.  Playing for your father-in-law has to be harder.  This was life for Chris Snee, a Boston College product who married the daughter of Tom Coughlin, who became the Head Coach of the New York Giants in 2004. That was the same season that the Giants drafted Snee in the Second Round.

By every account, Snee handled the pressure well, and he would become the starting Right Guard and was an All-Rookie.  Snee would start all 141 Games he played, blossomed into an upper-echelon Right Guard, and helped the Giants win Super Bowl XLII.

Following the Super Bowl, Snee went to three consecutive Pro Bowls and was a First Team All-Pro in 2008.  He aided the Giants in winning another Super Bowl for the 2011 season, and he was a Pro Bowl again in 2012.

Snee retired in 2014, having played for New York and Coughlin his entire career.  While he was never a flashy player, many of the Giants heroics by their offensive skill player happened because of Snee's work.