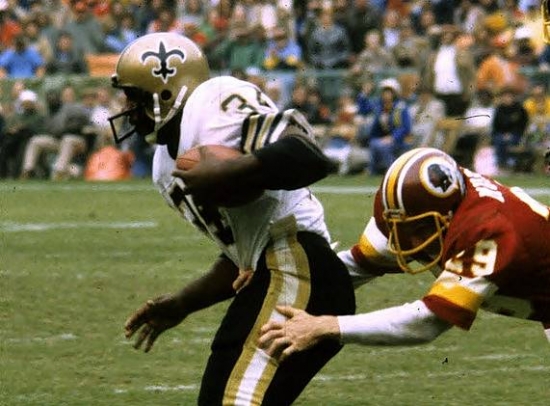 In 1976, the New Orleans Saints drafted Running Back, Chuck Muncie, in the First Round.  With their Second Round Pick, they took another Running Back, Tony Galbreath, from the University of Missouri.

This might have been strange, but Muncie and Galbreath were the “Thunder and Lightning” rushers for the Saints in the last half of the 1970s, and they both did well, providing excitement for the Saints fans. Galbreath was more of a receiving back with 284 Receptions for New Orleans, with his 2,221 Receiving Yards nearly matching his 2,865 Rushing Yards.  In two seasons (1978 & 1979), Galbreath exceeded 1,000 Yards in YFS, and he was also known as an above-average blocker.  Galbreath also was able to sub as the Saints Place Kicker, making two Field Goals and an Extra Point.

After the 1980 campaign, Galbreath was traded to Minnesota, and he would later win a Super Bowl with the New York Giants.  As a Saint, Galbreath accumulated 5,580 All-Purpose Yards and 33 Touchdowns.