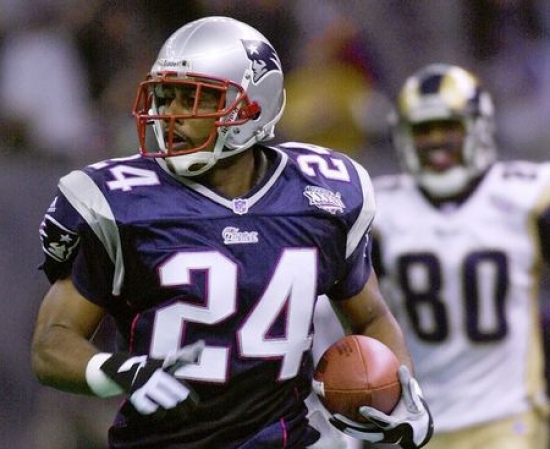 Ty Law came to the New England Patriots as a First Rounder (23rdOverall) from the University of Michigan, and he would prove to be one of the greatest defensive players in the history of the franchise.

Law did well in his first three years but had a breakout campaign in 1998, where he led the NFL in Interceptions (9) and went to his first Pro Bowl and First Team All-Pro.  Law had arrived, and he would be the cornerstone of the Patriots Defensive Backs, and once Tom Brady arrived, the Patriots were ready to bring a balanced attack to their NFL foes.

The Cornerback would be named to three straight Pro Bowls (2001-03), and he was a First Team All-Pro again in 2003.  The Pats made the Super Bowl in Brady’s first season as a starter, and in the big game against the favored St. Louis Rams, Law had the first score when he picked off Kurt Warner and ran it back 47 Yards.  New England would win two more Super Bowls in the next three seasons, giving his three in total.

Law left New England as a Free Agent for the New York Jets in 2005. With the Patriots, he would secure 36 Interceptions, running six back for TDs.  He also had 638 Tackles for the team.