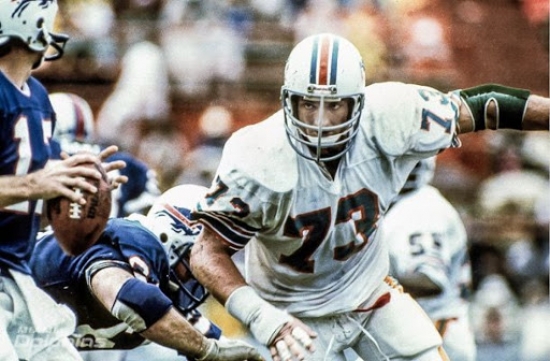 Bob Baumhower played the entirety of his pro career with the Miami Dolphins, and he was, without a doubt, one of the greatest defensive players in franchise history.

Arriving in 1977 as a second round pick from Alabama, Baumhower immediately started at Nose Tackle, where he started all but one of his 130 Games played.  Baumhower was a Pro Bowler in 1979 and followed that with a four-year streak of Pro Bowls from 1981 to 1984.  In each of those seasons, he was either a First Team or Second Team All-Pro, with the one First Team in coming in 1983.  That season, Baumhower was named the Defensive Player of the Year by Pro Football Weekly, and in the early 80s, his defensive work was a large part of Miami’s overall success.

Baumhower lost the entire 1985 due to knee and ankle issues, and he came back for one more year, which was sub-par.  He retired after that year.  In 2008, the Dolphins added Baumhower's name to their Honor Roll.