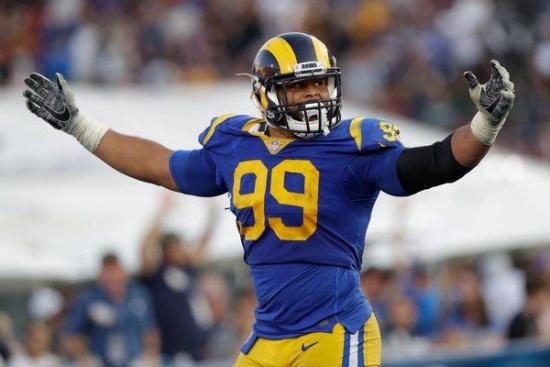 As of this writing, Aaron Donald has completed five seasons with the Rams where without question he has cemented himself as one of the top defensive players in the game.

In his final season at the University of Pittsburgh, Donald won the ACC Defensive Player of the Year Award, the Lombardi Award, the Bronko Nagurski Trophy, the Chuck Bednarik Award, and the Outland Trophy so there were lofty expectations for his play in the NFL, which you can easily say he shattered.  As a rookie, he was one of only five to make the Pro Bowl and won the Defensive Rookie of the Year Award.  In the four seasons after he established himself as the premier Defensive Tackle in Football where he was not only a Pro Bowler but a First Team All-Pro.  In 2017, he would win the Defensive Player of the Year Award, and when you thought he couldn't get any better, he did!

Donald's 2018 season was one of the best defensively by a Ram and considering the legends who wore the horns this is no small accomplishment.  Repeating as the Defensive Player of the Year, Donald led the NFL in Quarterback Sacks (20.5) and Tackles for Loss (25) and took his team to the Super Bowl.  He is one of only three players to win the DPOY back-to-back.  Donald was named to his fifth straight First Team All-Pro in 2019, and he again led the NFL in Tackles for Loss (20).  Donald was named to the 2010s All-Decade Team, so how did he respond to start the 2020s?  He led the NF in Approximate Value (20) and won his third DPOY, tying him with J.J. Watt and Lawrence Taylor.

For Aaron Donald to be ranked this high on a team with the history of the Los Angeles Rams is a testament to just how good he is.   Donald is one of the greatest defensive players that ever lived, and he isn't done yet.