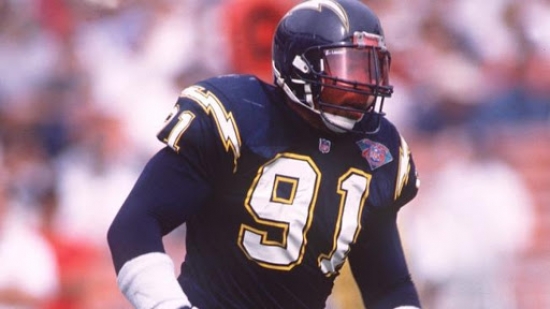 Leslie O'Neal had a phenomenal (or tragic) rookie season for the San Diego Chargers, who took the Oklahoma State Cowboy with their First Round Pick.  Not only was O'Neal an All-Rookie, but he was also named the Defensive Rookie of the Year.  However, it was equally tragic as he injured his knee, which ended not only that year, but the following season and half of the next one.

O’Neal was back to full capacity in 1989 and had moved to Outside Linebacker, and he rewarded the Chargers' patience with a 12.5 Sack year and a Pro Bowl trip.  In five of the next six years, O'Neal was named to the Pro Bowl, with the last four of those seasons occurring as a Defensive End.  In all of his Pro Bowl years, O'Neal had at least 12 Sacks, with a career-high of 17 happening in 1992.  O'Neal left for the St. Louis Rams in 1996, playing there for two years, and he had two more with Kansas City.

O'Neal left the team with 105.5 Sacks, which as of this writing makes him the Chargers' all-time leader.  The Chargers inducted him in their Hall of Fame in 2014.