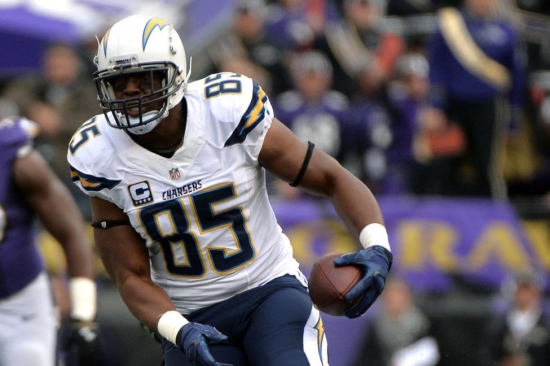 Antonio Gates had a good career a Kent State, but it did not result in any NFL team drafting him in 2003.  The San Diego Chargers signed him, and he would wear the lightning bolt on his helmet for the entirety of his 16-year career.

Gates had 389 yards as a rookie, which was a decent total, but in 2004 he became a much bigger part of the Chargers' offense, earning three straight First Team All-Pro Selections and eight consecutive Pro Bowls.  From 2004 to 2014, he would have at least 700 Receiving Yards with two 1,000 Yard years. For years, Gates was a money-man, punching the ball into the end zone 116 times for the Chargers, with eight 8-plus TD seasons.

Gates was released before the 2018 season, but he was resigned for one more year following an injury to Hunter Henry. After a year as a Free Agent, he retired in January of 2020.

At the time of his retirement, he is the all-time leader in Touchdowns for a Tight End, and he is currently the franchise leader if Receiving Yards (11,841) and Receiving Touchdowns (116).