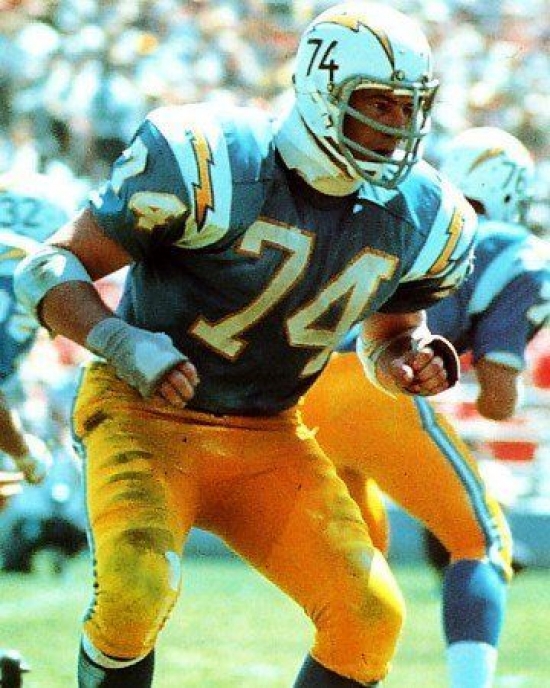 Ron Mix had a spectacular career at USC, and to nobody's surprise, he was a First Round Pick in the NFL.  The problem was that it was the Baltimore Colts on the East Coast who chose him, and the native of Los Angeles wanted to stay close to home.  In the AFL, the Boston Patriots took him in the first-ever draft of that league, but a trade to the Chargers allowed him to stay close to home.

It worked out for Mix and the Chargers, as the case can be made that he was the greatest Offensive Lineman in the history of the American Football League.  Mix was a First Team All-Pro in his first nine seasons, and he was an AFL All-Star in eight of them.  Usually playing at Right Tackle, Mix was so good not only at blocking and protecting his QB, he was brilliant in that he only ever got called on two holding penalties.

Notably, Mix was the first white player to join the black players in the 1965 AFL All-Star Game in New Orleans, protesting the city's civil rights and segregation issues.

After his only subpar year in a Bolts uniform (1969), Mix retired, but he returned for one year with the Oakland Raiders.