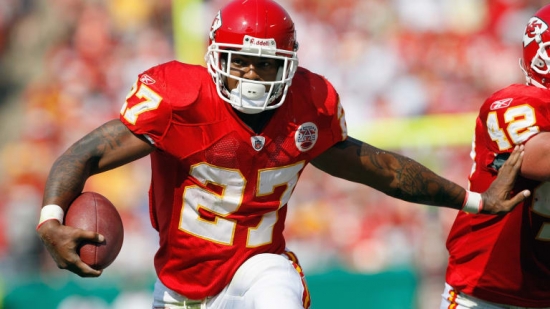 The overall Kansas City Chief resume of Larry Johnson is an inconsistent one.  A 2003 First Round Draft Pick from Penn State, Johnson was not someone who Head Coach Dick Vermeil particularly wanted and their relationship was off to a rocky start.  Johnson saw very little playing time and it took an injury to the incumbent Priest Holmes in Johnson’s second year for him to see any real action, but that would change in 2005.

Johnson was given the chance to be the first string Running Back and he would showcase his skills rushing for 1,750 Yards for 20 Touchdowns, which was good enough for third and second respectively.  It got better in 2006 where he would become a First Team All-Pro rushing for 1,789 Yards and 17 Touchdowns (second overall in both categories).  He was fourth in All-Purpose Yards in both of those years and was a Pro Bowler both times.

An injury midway through the 2007 season brought him back under 1,000 Yards and he fell under that mark again in 2008 but he also bemoaned his lack of touches and was occasionally a healthy scratch.  Johnson and Kansas City management parted ways midway through 2009 and the Running Back limped through the rest of his career.

Despite the issues that Larry Johnson had in KC his two monster seasons at a critical offensive position earned him his spot here.