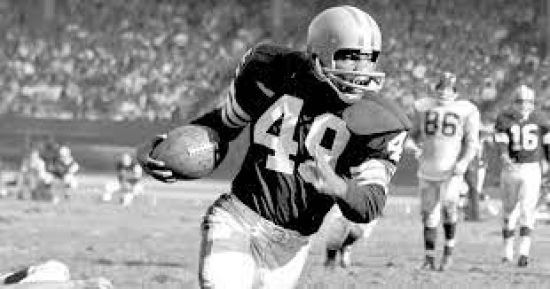 Bobby Mitchell was one of the many finds that Paul Brown found in the middle rounds of the NFL Draft, in his case, the Seventh in 1958.

Mitchell was used as an everything weapon for the Browns, rushing, receiving, and returning.  In the four seasons he competed for Cleveland, Mitchell accumulated 5,916 All-Purpose Yards, and was in the top six in all of those seasons.  With Jim Brown, Mitchell was expendable, and he was traded to Washington for the college star Ernie Davis, who unbeknownst to all parties, had leukemia and never played in the NFL.

Mitchell, who was also traded in part to force Washington to integrate, was a huge part of Washington’s offense.  He entered the Pro Football Hall of Fame in 1983 and was chosen for the first class of the Browns Ring of Honor in 2010.