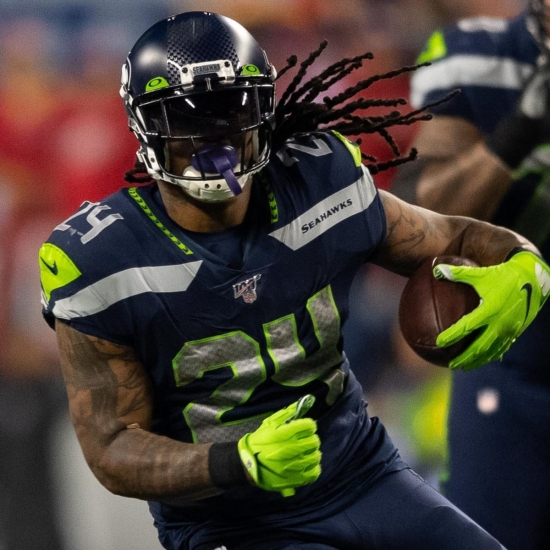 In the early 2010’s, Marshawn Lynch could make the claim that he was the best Running Back in the NFL, and if you didn’t believe that you would have to agree that he was one of the best known.  Lynch had over 1,000 Rushing Yards in his first two seasons in football where he was offensive cog of the Buffalo Bills.  He struggled in 2009 and was traded to the Seattle Seahawks early in 2010 in a transaction that Orchard Park would like to forget.

From 2011 to 2014, Lynch would rush for over 1,200 Yards and was in the top seven in that metric each year.  A First Team All-Pro in 2012 (with a career high of 1,590 Yards) he would also have at least 11 Rushing TD those years with him leafing the league in both 2013 and 2014.  Lynch was the focus of the Seahawks offensive attack and it would get them to two straight Super Bowls where he rushed for a Touchdown in Seattle’s Super Bowl XLVIII dismantling of the Denver Broncos.  He led them to the next Super Bowl where he rushed for 102 Yards and a TD but in the last play of the game where everyone thought he would get the ball on the New England 1 Yard Line, he didn’t and Seahawks Quarterback, Russell Wilson threw a pick that ended the game.

Lynch retired after 2015 but would make a comeback for his hometown Oakland Raiders where he played for two more seasons.  He retired again, but made a brief comeback with the Seahawks late in the 2019 season for their playoff run.  This allowed Lynch to retire with over 10,000 Rushing Yards (10,413) and he would gain another 2,214 from the air.  Overall, he would punch the ball in the endzone 94 times.

Should Marshawn Lynch be in the Hall of Fame?