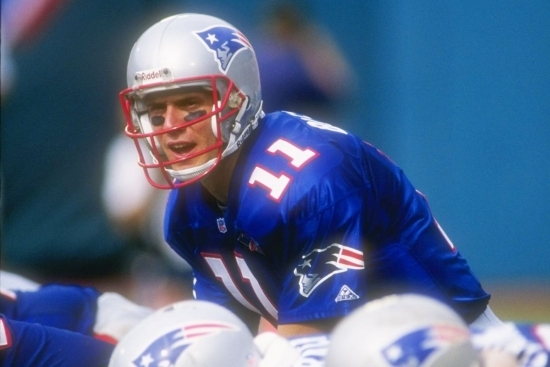 Did we make a mistake not ranking Drew Bledsoe in his first year of eligibility? Statistically speaking we may have as his career statistics are more impressive than other Quarterbacks ranked higher than him. However other intangibles come into play which just makes it so hard for us to determine the perfect place for him on this list.


Sure he has solid career totals and impressive statistical seasons but what can never be forgotten is that once he got injured, Tom Brady stepped in and took the Patriots over the final hurdle that Bledsoe never could do; and that there lies the problem. In his first year of eligibility, Bledsoe was not a semi-finalist which shows that many view him the same way we do…a very good QB who also was a bit of a stat accumulator at the end yet has a bit of a Wally Pipp quality to him. Drew Bledsoe was very good, but a lot of things would have to go right for him to be considered a serious threat for Canton, for that elusive Super Bowl (which he does have but on the injured list) means more on a Quarterback’s Hall of Fame resume than any other position.

+1 #2 Rick Humphrey 2015-04-27 11:50
Small error in your piece, Bledsoe wasn't on IR in 2001. Matter of fact he played, and played well, in the AFCCG in relief of an injured Brady.
Not sure about the HOF, but there's no denying he was one of the top QBs in the league for a good number of years.
Quote
+4 #1 Annette Mordec 2014-11-07 07:18
I really do hope that Drew gets in. He is extremely underrated and who knows if he would not have gotten the Patriots over the hump and gotten to the Super Bowl if he didn't get hurt?
Yes, Tom Brady got the team to the Super Bowl, but not without Drew's help.
Help us get Drew into the Hall of Fame
Quote
Refresh comments list
RSS feed for comments to this post