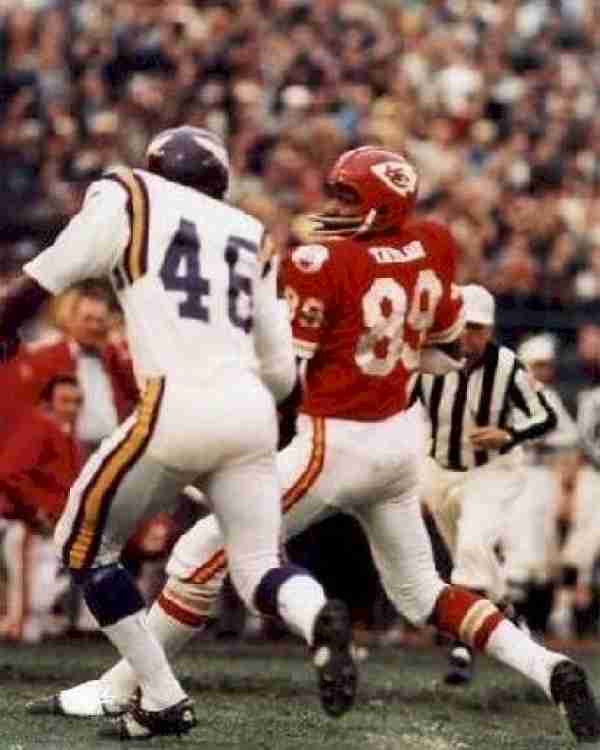 It may seem a lifetime ago, but when Hall of Fame Quarterback Len Dawson was looking for a deep threat, it was Otis Taylor who was the target.  In fact, it was Taylor who caught half of the passes for the Kansas City Chiefs in their Super Bowl IV victory.

Taylor was a star in the AFL, and a big reason that the Chiefs were good.  He was their top receiver and rewarded them with a 1,297 yard season in 1966.  He was still productive after the NFL/AFL merger and the league in receiving yards in 1971.


Unfortunately, for Otis Taylor and other great Wide Receivers of his generation, today’s wideouts put up much higher numbers in the open NFL which makes Taylor’s numbers average.  As Len Dawson will tell you, Otis Taylor was anything but average.

Should Otis Taylor be in the Hall of Fame?

Should Otis Taylor be in the Hall of Fame?

0 #4 Marcus Judd 2020-01-16 18:27
Plee let me know if Len Dawson would be worthy of HOF if he didn't have a target like Otis Taylor. Over half of the completions of SB4 went to one man. He deserves to be recognized for his play in a game before they started protecting everyone.
Quote
+3 #3 Johnathan 2014-08-05 14:33
As much as I feel great for the players that are in the HOF, I can't really take it seriously without Taylor in there. He was the best receiver of his era and one of the most explosive offensive players I've ever seen.

The problem with the HOF is the selection committee (which makes the induction into the HOF completely meaningless) . In short, sports writers and sports announcers should never be part of the process as many of them have never played football (let alone pro football).

There is no way Peter King (who I like as a sports media person) knows more about a player's value than that of an opposing team's player or coach. Most writers no little about the true intricacies of the game and rely on stats to tell them who is a good player and not so good player

The best way to gauge a player's worthiness for the HOF
is to ask the opposing teams that had to stop the player.

And, if that's the gauge, Otis Taylor would have been in the Hall of Fame five years after he retired.

As for how the HOF is run now? It's better to view it as a popularity contest (do folks in the media like a player or like his stats).

Maybe the institution is properly named after all: Hall of Fame - Meaning which player is the most FAMOUS, not the best (which is why players that perform in New York have a better chance of getting in...They're simply in the news more).
Quote
+3 #2 Robert 2012-07-14 15:59
To me he most reminds me of Andre Johnson. About the same size, and skill set. Only Taylor was more physical. He put up great numbers even after the merger. But think of what he could have done in today's game...
Quote
+2 #1 jimmy26 -0001-11-30 00:00
here is the argument! Name one other player who was the top offensive threat and player on a super bowl winning team that is not in the hall of fame or soon will be. Taylor was the best receiver in football in the late 60's early 70's. Sort of a combo Moss-Owens type who was too big and too fast for the guys who tried to cover him. he made the Chiefs that much better because he had to be stopped even if he was truly unstoppable. Name another receiver who was the best at his position for as long as he was that is not in. The problem is that his stats pale to modern day players and players from more throwing oriented offenses because the Chiefs were a run first (made easier by having to guard him) and defense laden team. But a very successful as two super bowl trips and one win can attest. Put him on the Charegers of the 70's or any modern and watch waht his stats would have been. he is one that has been forgotten except for the players who played against him and with him. len Dawson who is questionable but is in was not half the player Taylor was and he knows it. Number two on my list of old timers who should be in (behind only Kramer). If they let Bobby hayes in Taylor should already have been in years ago. Charlie Joiner was never the top receiver on any team he played for and never was in as super bowl but because he played on throwing teams his stats are inflated. About realisticall y half the reciever of Mr. Otis Taylor.
Quote
Refresh comments list
RSS feed for comments to this post