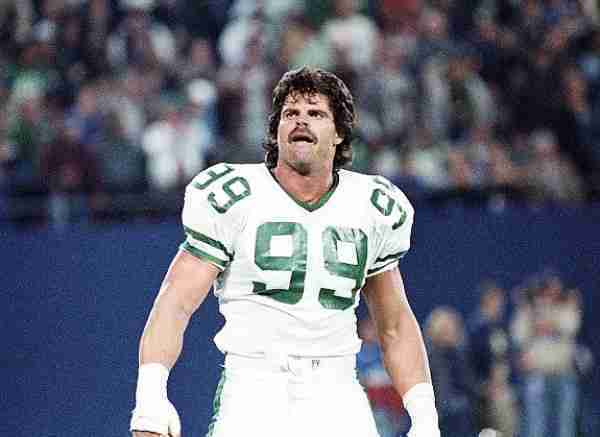 Although Quarterback sacks have always taken place in football, it was not an official statistic in the NFL until 1982.  The first true “sackmaster” of American football would have to be the flamboyant and somewhat controversial Mark Gastineau who terrorized Quarterbacks; and not because he had sex with Brigitte Neilsen.


Mark Gastineau seemed to be built for terrorizing gunslingers.  It was what he was best at, and it could be assured that if the Jets were on the schedule that the opposing QB would have a sleepless night before the game.  Gastineau twice led the league in the new official statistic and set a season record that would not be broken until 2001 by Michael Strahan.  As the sack became in vogue, Gastineau became synonymous with it, especially as he developed his “sack dance”.

For a four year period, it was hard to argue that Mark Gastineau was not among the top three pass rushers in the NFL.  He has been accused by some as being too one-dimensional and as he did rub some people the wrong way, he faces a long climb should he ever wish to see himself in Canton.

+3 #6 Joseph Wright 2015-05-02 07:24
Ziggy, you're an idiot! How can you say Gastineau "wasn't that good of a pass rusher," when he collected 107 sacks for his career, including seasons with 20 (1981), 19 (1983) and 22 (1984)?
Quote
+4 #5 aura 2013-03-22 04:20
That's your opinion !my friend was mark gastinau at that time and he was a legend then.
Quote
-1 #4 Ziggy Koole -0001-11-30 00:00
Are you referring to Randall Cunningham? Because then I'd agree with you.Jokes, I know exactly who you're referring to.
Quote
-2 #3 jimmy26 -0001-11-30 00:00
Funny u should mention one dimensional when decriboing a player who shouldn' t get in Ziggy! It sounds familiar!
Quote
-5 #2 Ziggy Koole -0001-11-30 00:00
Really? #82! He shouldn' t even be in the top 100, I think he should be somewhere between #300 and 400. I'm not saying this because he's a jerk, I'm saying this because he was an overrated pass rusher in general. Joe Klecko was 30 times better than him and Klecko is borderline at best. No, Gastineau doesn't deserve to be in for a number of reasons, #1 he choked in the playoffs, he wasn't that good of a pass rusher, Klecko was a better all around defensive end and neither would have done anything without marty lyons, and he couldnt do anything except rush the passer, which as i mentioned before, he was above average at best as a pass rusher. If anyone from the NY sack exchange should make it, it should be klecko.
Quote
+5 #1 jimmy26 -0001-11-30 00:00
Really? # 82! Do you realize that Mr. Gastineau is the reason that we ahve the sack as an official NFL statisitic. Not Mr. Taylor. Sure he might have been an arrogant self promoting porn star looking jerk but Mark Gastineau is the best pass rusher I have ever seen in the NFL. He may never get in because of his reputation but anyone that knows a thing about football and was around in the 80's knows # 99 was the real deal and most definitely deserves to be in Canton.
Quote
Refresh comments list
RSS feed for comments to this post