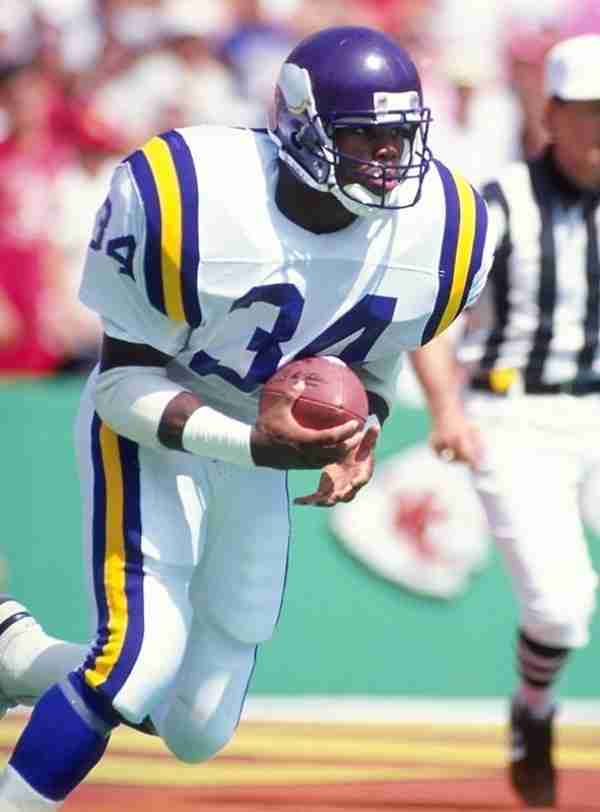 Walker would go to the Dallas Cowboys and would forever try to live up to the Play Station like numbers he put up in College and in the USFL.  Walker was still very good and put up good numbers for Dallas in both receiving and running the ball.  He was however the focal point of one of the more lopsided trades in NFL history where the Vikings sent five players and a multitude of draft picks (three of which were Emmitt Smith, Alvin Harper, and Darren Woodson).  Dallas would use this to build a dynasty of the ’90s, and Minnesota coaches took their frustration out on Walker who was not used to the best of his ability while as a Viking.  Herschel was still good, but his stock dramatically went down.


That lopsided trade took away from his legacy, but Herschel Walker should be remembered as a great Running Back who contributed in pass and kick return situations.  If he were a rookie today coming out of Georgia, where this is no USFL would he have had a shot to shatter NFL rushing records?

Should Herschel Walker be in the Hall of Fame?

Should Herschel Walker be in the Hall of Fame?

But in the pros Walker was vastly overrated. As physically gifted as he was, Walker never could learn to read holes or folow blocks.

Herschel could read blocks; just look at the pro highlights on some of his runs. The problem was that the two teams that he went to that could have been Super Bowl winners (Minnesota, Philly) not only did not use Walker as they should (like the Cowboys used E Smith) but also were gutted by injuries to their Ds when Walker arrived or shortly afterwards And Walker got the blame, despite not having anything to do with that and despite only getting something like 10-12 touches a game (and if you get that few touches, you're not going to affect the outcome much). Walker in particular was a back that wore down Ds in the 2nd half but if your D now giving up 4 1st half TDs instead of being a previously dominating D and you have to throw any RB is going to be less effective.
Quote
0 #7 Stewart Millen 2021-01-03 18:02
Herschel belongs in the HOF. His numbers, as good a s they were, would have been better if a) He hadn't shared time with a fading Tony Dorsett in Dallas for almost 2 years and b) if the Vikings coaches had been willing to use him properly rather than stick to their RB-by committee approach (I don't care if you're Jim Brown, Walter Payton, and Barry Sanders all rolled into one, you can only do so much if you only get like 11-12 carries per game; and a back like Walker in particular wears out a defense if he gets 20+ touches). c) the Eagles had similarly stuck with him; despite him being one of the brighter spots on their roster.

So much of Walker's not being in the HOF is just bad luck. Every team he went to was either already on the downslide (Dallas) or was gutted by injuries or defections on D which took potential Super Bowl contenders and turned them into playoff also-rans. But Walker got the blame unfairly.
Quote
0 #6 Miketabor1997 2020-10-17 00:11
Tough one (one is the greatest athletes of all time would have medaled in the 1980 Olympics 2nd only to Carl Lewis. USFl Santa were viedo gsm e
He mad when the Olympic bobsled team one is the 5 greatest athletes of all time Bo Deion Walker Charlie Ward a few others
Quote
+2 #5 David M 2014-01-06 01:42
Herschel's NFL accomplishme nts themselves are HOF worthy:
…retired second all-time in all-purpose yards, besting all 15 HOF RB's from the 60's, 70's, 80's, & 90's.
…Walker's 8225 NFL rushing yards were more than 4 HOF RB's and nearly as many as 3 others.
…his 4859 NFL receiving yards were more than all but two RB's and more than 16 HOF RB's, including Walter Payton, Barry Sanders, and Emmitt Smith.
…who has more NFL kickoff return yards than Herschel's 5084? Probably no one - certainly no HOF RB.
…only player in NFL history to gain more than 4000 yards rushing, receiving, and returning.
…first player in NFL history to record TDs of 90 yards or longer rushing, receiving, and returning in the same year.
…only player in NFL history to record an 84+ yard rushing TD and an 84+ yard receiving TD in the same game.
Not only are Herschel's NFL accomplishme nts HOF worthy, he also deserved to be higher than 39th on your list!
Quote
0 #4 Wessley 2012-09-24 09:45
Another USFLer slighted because the NFL is apparently so good. Walker got yards (1500 one season) whilst at Dallas and he was no good ? He had to share time, for a while anyway, with the over-rated Tony Dorsett don't forget. He couldn't read blocks ? What a load of rubbish. The HOF should recognise all froms of pro-football in a player's stats. That being the case, Herschel's 2411 yards in 1985 IS the pro-football record.
Quote
-3 #3 Mark Chirhart 2012-07-23 21:05
He dominated during his last two years with New Jersey. I say yes.
Quote
+5 #2 sg15fan -0001-11-30 00:00
well said
Quote
+4 #1 jimmy26 -0001-11-30 00:00
Remember this si not the college football hall of fame. This is the pro football hall of fame. if it was the former then Walker (who is in this one and desrvedly so) would be a no brainer. But in the pros Walker was vastly overrated. As physically gifted as he was, Walker never could learn to read holes or folow blocks. As much as he was a focal point of teams to stop, he usually was and thus was never the player many thought he should have been. Potential based on his size and speed combination ranks up there with bo Jackson and maybe even jim Brown. But in actual reality he was a good back on weak teams who never was the player he could have or should have been.
Quote
Refresh comments list
RSS feed for comments to this post