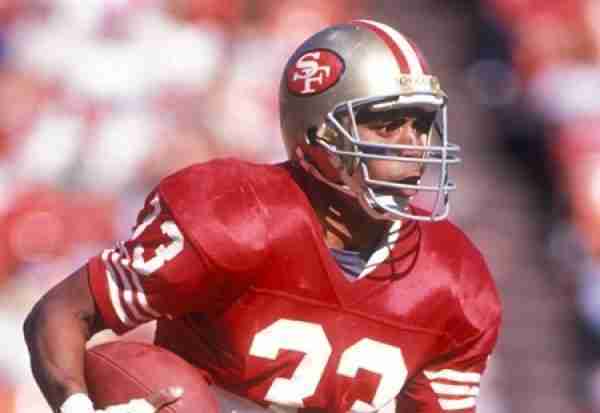 
He was a major part of three Super Bowl Championship teams.  Despite his groundbreaking style, Craig is often overlooked as he played on some of the most prolific offenses in football and critics have said he was the beneficiary of the great offensive stars (Montana & Rice) around him.  Regardless, Roger Craig was a brilliant weapon for the 49ers offense and though placing him into the Hall is very much open for debate, he should have received way more consideration than he has thus far, though the 2020 Blue Ribbon Finalist spot is a promising sign.

-3 #7 habacuc the prophet 2018-07-14 11:20
including playoffs. 14000 combined yards. 82 touchdowns. roger craig should be in the hall of fame. voters are jealous of the 49ers 5 super bowl championship s in 14 years. its sad. Jesus said its more blessed to give than to receive.
Quote
-3 #6 Ken Balletta Jr. 2016-01-10 03:04
Roger Craig deserves to be in the Hall of Fame without a doubt he change the running back fg orever.
Quote
+4 #5 cka2nd . 2015-08-10 17:18
Dan K., there have been all-purpose backs around for decades so I can't see how Roger Craig was "THE forerunner [emphasis added]" for guys like Thurman Thomas and Marshall Faulk anymore than Walter Payton was. In the 70's, besides Foreman you had Lydell Mitchell, Greg Pruitt and Terry Metcalf. In the 50's and 60's, the AFL had Abner Haynes and the NFL Frank Gifford (R.I.P.), Jim Brown and the incredible Lenny Moore, arguably the greatest dual threat in the history of the game. Craig was a very fine player, but he is at roughly the same level as Foreman, Mitchell, Pruitt and Haynes, just below that of Hall of Famers like Faulk, Brown and Moore.
Quote
+6 #4 cka2nd . 2015-08-10 16:50
I'm sorry, but no. In reviewing the stats for Roger Craig's four Pro Bowl and/or All-Pro seasons and those for Chuck Foreman's five PB/AP seasons I find them pretty even:

Craig has an advantage in yards/rush, Foreman in yards/catch and yards per touch, i.e., combined rushes and receptions. Foreman has a clear advantage in touchdowns per run, reception, game and season while Craig had the better playoff stats, although not by an overwhelming margin.

I'm a Vikings fan but as much as I loved Chuck Foreman, I don't think either he or Roger Craig earned a spot in the Pro Football Hall of Fame.
Quote
-5 #3 Craig in Canton 2014-11-15 00:07
Lets get him in! We are working with #33 to get him inducted in Canton where he belongs. Follow our Facebook page and share!

[censored]s://www.facebook.com/CraigInCanton
Quote
-4 #2 Roger Craigin Canton 2014-11-15 00:05
We are working with #33 to get him inducted FINALLY! Share our Facebook page with your fans and followers!

[censored]s://www.facebook.com/CraigInCanton
Quote
#1 Dan K. 2013-08-16 01:09
He has to get in, he was the first to have 1000 yards both rushing and receiving. He was the forerunner of the likes of Thurman Thomas and Marshall Faulk. Critics are wrong, he didn't benefit from playing with the other stars: He helped the team not to be one dimensional and he had a good SB performance in XIX, before Rice was drafter
Quote
Refresh comments list
RSS feed for comments to this post