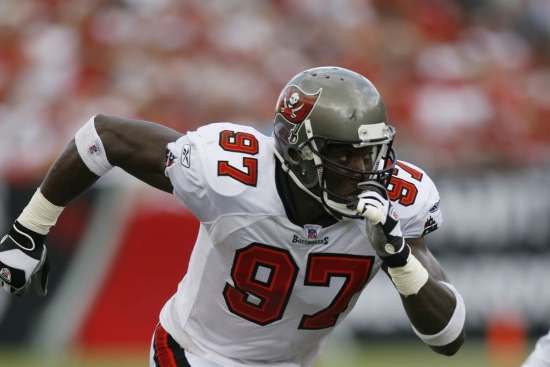 The pro career of Simeon Rice began in 1996 when he was drafted third overall by the Arizona Cardinals.   Playing at Defensive End, Rice proved his worth instantly with a 12.5 Sack year and won the Defensive Rookie of the Year.  Rice played with the Cardinals for five seasons and had three 10 plus Sack years there, peaking with 16.5 in 1998, which was good enough for second overall.

Rice would sign with the Tampa Bay Buccaneers in 2001, adding to an already potent defensive corp.  He would be part of Tampa’s dominating Super Bowl win in 2002, and he would again finish second in Sacks (15.5) and was named a First Team All-Pro.  The year after, he went to his third Pro Bowl, again was second in Sacks with 15.5, and led the NFL in Forced Fumbles (6).  With the Bucs, Rice had five consecutive 11 plus Sack seasons (2001-05).

Should Simeon Rice be in the Hall of Fame?