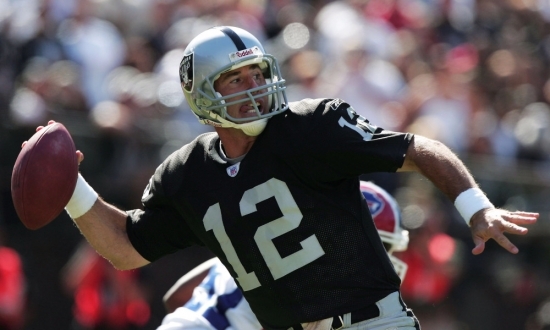 It took a long time before Rich Gannon really had his chance in the NFL and/or found his groove, but once he did, he had a stretch where he was amongst the best Quarterbacks in the National Football League.

From the University of Delaware, Gannon was drafted by the New England Patriots in 1987, who wanted to convert him to a Running Back.   That never transpired, and he was traded to the Minnesota Vikings, where he was a back-up for three years until winning the starting job in 1990.  Gannon did okay for a few years but lost the starting job and was traded to the Washington Redskins, where a similar pattern would happen.  It would all change in 1999 when he signed as a Free Agent with the Oakland Raiders.

Under Jon Gruden's West Coast Offense, Gannon became a star.  He would be named to the Pro Bowl in four consecutive seasons (1999-02) and was a First Team All-Pro in 2000 & 2002.  In those two All-Pro campaigns, Gannon won the Bert Bell Award and was the AP MVP in the latter year, where he led the NFL in Passing Yards (4,689).  In all of those four years, he was in the top five in Touchdown passes.  He would be injured early in 2003 from a helmet to helmet collision and was out of football two years later.

What kills Gannon’s chances is that when he did make it to the Super Bowl, he was picked off five times, though it can be argued that it did not help that Gruden was now coaching the opposing Tampa Bay Buccaneers.  Had that gone differently, we expect that Raiders fans would be championing his cause as opposed to (or in addition) to Jim Plunkett.

Should Rich Gannon be in the Hall of Fame?