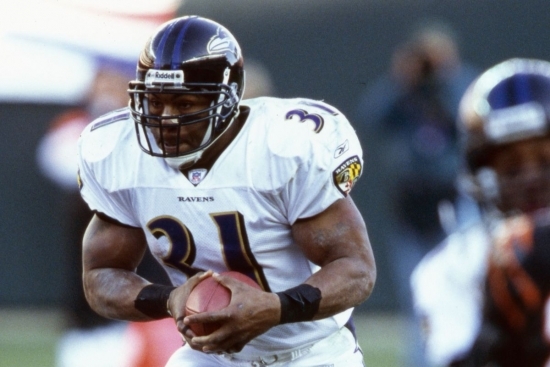 Drafted 5th overall out of the University of Tennessee, Jamal Lewis was an immediate offensive force for the Baltimore Ravens rushing for 1,364 Yards in his rookie season.  More importantly, the Ravens went to the Super Bowl, and Lewis rushed for over 100 Yards and a TD in their Super Bowl XXXV win.  A knee injury took him out of his sophomore season, but he came back in 2002 with another 1,300 Yard Season though it was his 2003 year that places him on this list.  He rushed for 2,066 Yards, which as of this writing, is the third-best in history.  That year, Lewis was named the AP Offensive Player of the Year.

Lewis would have four more seasons where he exceeded 1,000 Rushing Yards (two with Baltimore and two with the Cleveland Browns), and he finished his career with 10,607 Rushing Yards with 58 TDs.

Should Jamal Lewis be in the Hall of Fame?