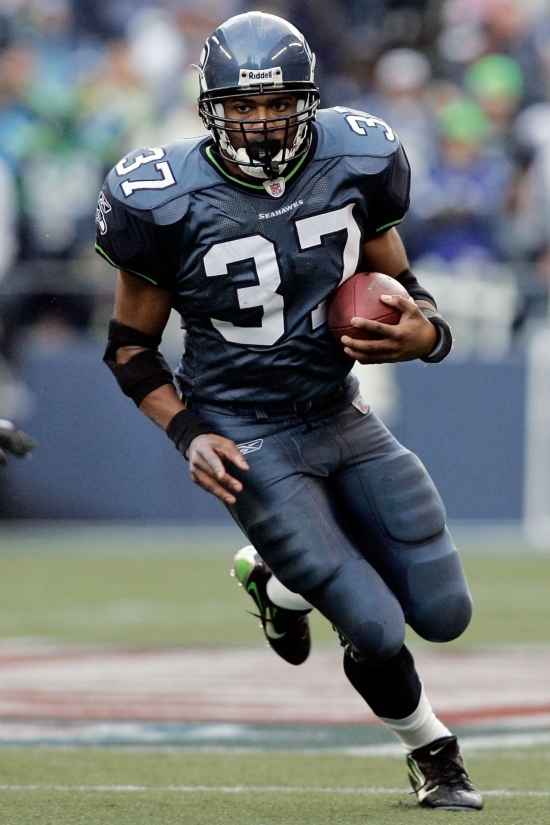 Coming out of the University of Alabama, Shaun Alexander backed up Ricky Watters in his rookie season (2000), and after Watters' retirement, he would become the lead back for the Seattle Seahawks.  Alexander would go on to a five-year run where he exceeded over 1,000 Rushing Yards, but most importantly, would become a touchdown factory.  In 2001, he led the NFL with 14 Rushing TDs and would never go below that in the next four seasons.

Alexander would be named to his first of three straight Pro Bowls (2003) when he had a 1,435 Rushing Yard season, and he would increase that to 1,696 in 2004 and was a Second Team All-Pro.   He followed that up with the best season of his career and one of the best offensive campaigns ever by a Seattle Seahawks player.  He rushed for a league-leading 1,880 Yards with 27 Rushing Touchdowns, and he was named a First Team All-Pro, AP Offensive Player of the Year and the AP MVP.

Unfortunately, injuries piled up, and he was out of football three years later and failed to reach the magic 10,000 Yard Rushing mark.  He is, however, one of the few players to rush for 100 Touchdowns, with 112 overall.

Should Shaun Alexander be in the Hall of Fame?