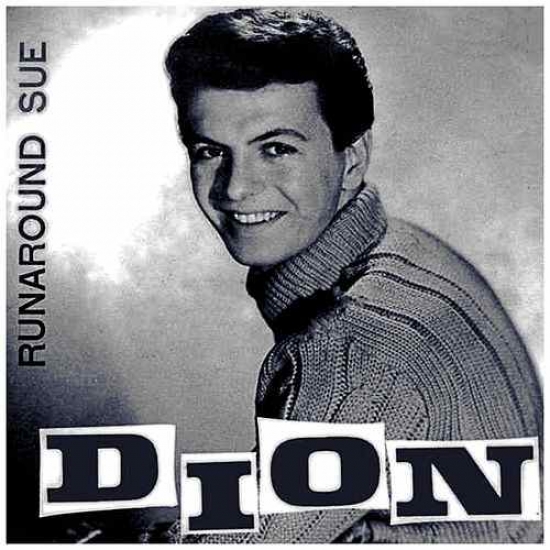 The story of the disloyal lover never gets old in song.  It is a story that has existed at music’s dawn, and will be around when the sun sets on the last note.  Actually, isn’t love in some capacity part of almost all songs?  With Dion’s lone number one hit, “Runaround Sue”, we have no ambiguity as to whether Sue was of easy virtue.[1]

Dion DiMucci (professionally known as Dion) was one of the most successful musical acts of the early 1960’s, and was one of the most versatile, though he wasn’t thought of that way in his prime.  His origins began in the Bronx, where he would form a doo-wop group amongst his friends though when the newly formed Mohawk Records originally signed him, his backup singers (who he never met) were added after in postproduction.  Thankfully for Dion, the label allowed Dion to recruit people from his neighborhood as opposed to people who the label thought would fit his vocal skills.

The late 50’s would be good to Dion & The Belmonts[2] with them generating two Top Ten hits in 1959 with “Where or When” (#3) and the more memorable “Teenager in Love” (#5), and once again referencing the “Day the Music Died”, Dion and the Belmonts were on the bill at that Winter Party Dance Tour, and according to Dion, his frugalness prevented them from spending money to be on the plane that killed Holly, Valens and the Big Bopper, and would become the de facto headliner where Bobby Vee would push his first domino to stardom.[3]

Dion would go on his own in 1960 and while he still utilized doo wop elements into his songs, he injected a lot more contemporary pop and a touch of R&B sensibilities and would have his most successful commercial period, not only with “Runaround Sue” but with “The Wanderer”, “Lovers Who Wander” and “Ruby Baby”, all of which wet to the Top Five in 1962, though it was his number one about a loose woman that he is still most known for.

Although it is about a jilted love affair and a warning to other men, the song was undeniably infectious song (much like being with Sue might make you catch an infection) and cemented him as one of the biggest stars of the earl 1960’s.  1970’s teen idol, Leif Garrett would later cover it in 1978 and went to #13 with it, and many early 80’s filmgoers likely recall it being done by Eddie and the Cruisers in the same named film.

Uh oh…I feel another long and unnecessary tangent coming on.

Since no song from the Eddie and the Cruisers soundtrack went number one in the Hot 100, I can’t help but spend a few paragraphs taking the opening to talk about my favorite musically inaccurate film of all time.

The music was all done by a Rhode Island bar band, named John Cafferty and the Beaver Brown Band, who up until that time had a decent run in New England, but were dismissed as Bruce Springsteen and the E Street Band clones (which essentially they were), and they were hired to do to the music for the film.

Two of their songs that were already released locally “Tender Years” and “Wild Summer Nights” would be used, and they would record in addition a cover of “Runaround Sue” “Runaway” and “On the Darkside”, which would actually go to #9 on the Hot 100 and to #1 on the mainstream rock chart, but it was presented that this went number one in the fictional rock world that the Cruisers lived in.

There is no way in hell that this song would have possibly gone to the top of any charts, or even appear in one in the early 60’s!

As for the closing song, “A Season in Hell”, a song that Eddie made because he really wanted to create a new sound, well at least he succeeded in not only creating an inaccurate period song, but one that did create a new smell of crap.  Eddie’s label was right in not releasing it as it would not be successful in the early 60’s or any decade!

Oh…I actually do like that movie, but I think mostly to yell at the screen for the musical fallacies, but let’s move back to Dion.

Dion would fade in the mid-60’s, but not exactly because he was considered passé (although he was), but because he dramatically shifted gears to releasing blues material in the mid-60’s, folk in the late 60’s and more adult contemporary thereafter, though it should be noted that his tribute song “Abraham, Martin and John” (to Lincoln, Luther King and Kennedy respectively) was a Top Ten hit in 1969.

By the 1980’s, Dion, who for years he fought for critical respect and was dismissed by so many as just another teen idol that was force-fed down the public’s throats, had become a respected cog in the growth of rock and roll and was an early inductee (1989) into the Rock and Roll Hall of Fame.

Not a bad career for someone thought of originally as a “teenager in love”.

[2] Why the name “Belmonts”?  That was a street name near where they grew up.