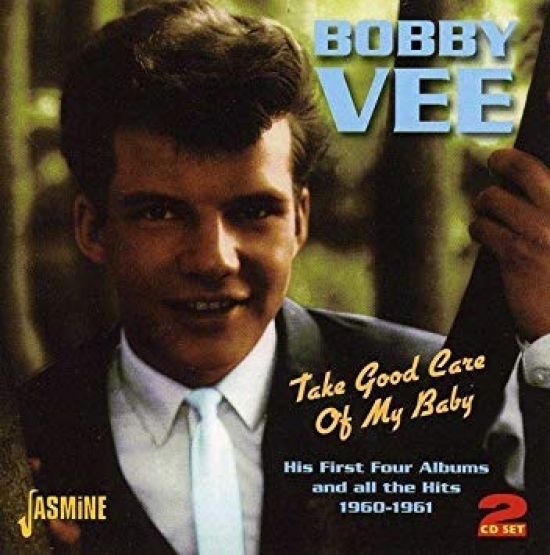 One of the biggest stars of the early 1960’s, Bobby Vee was a successful teen idol who had a plethora of chart success but his path to success had a very auspicious start and essentially at the expense of a trio of musical stars.

From Fargo, North Dakota, Bobby Vee (born Robert Velline) had a makeshift band assembled at the age of 15 called the Shadows who volunteered for a gig in Moorhead, Minnesota in February of 1959.  This may seem like an arbitrary event but they replaced Buddy Holly, who died the day before, ironically a few days before Vee was scheduled to see him in concert in his hometown.[1]

I can’t even imagine the pressure that was on a fifteen year old to fill the shoes of a legend, but the accounts say that he knocked it out of the park.  To borrow a sports analogy, sometimes a young pitcher or a quarterback enters a pressure filled situation but the athlete seems oblivious to just how much pressure it really is; essentially they don’t know any better.

Bobby Vee’s first hit was actually one he wrote, a Buddy Holly like song called “Suzie Baby” that only went to #77 in 1959, but 1960 would see him embrace the brill building pop sound that had become very popular and he would populate the Top Ten twice with the Clovers song, “Devil or Angel” (#6) and “Rubber Ball” (also #6), and in 1961 would score his first and only number one song with “Take Good Care of My Baby”.

That partucuar song was written by the dynamic team of Gerry Goffin and Carole King and had a cheerful ring to it, a near perfect association of the breezy voice of Bobby Vee.  Arguably, Vee was the soundtrack to young love in the early 60’s, and he would score more hits with “Run To Him” (#2 in 1961) and “The Night Has A Thousand Eyes” (#3 in 1962), however this would be the last time that Bobby Vee would have a Top Ten hit, and I think you already see the pattern as to why.

Like so many others, the British Invasion did him in too and perhaps the best exclamation point was when Vee released in 1964 the album, “Bobby Vee Sings the New Sound From England!” which had a title that basically said “I am a follower to new music trends” and off he went to the oldies circuit, even though the men who replaced him (The Beatles and The Rolling Stones) were his age or older.

That’s one of the rules of pop culture; you are as old as you are perceived to be.

[1] “The Day the Music Died” will be referenced again in ten years.  I think most of you know which song I am referring to.

[2] Not that you asked this is my favorite Elvis Presley song.

More in this category: « Michael Hit the Road Jack »