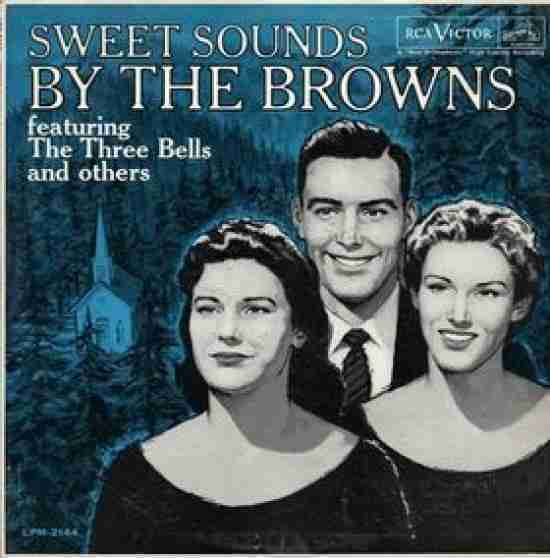 
Beyond “The Three Bells” I could tell you the following about the Browns: They sung “The Three Bells” and they weren’t brown so it came as a mild surprise to me to learn that the group had a slew of Country music hits before and after this track, though this would be their only number one on both charts.[1]

The group was made up of the sibling combination of Jim Ed, Maxine and Bonnie Brown and while their origins were country at heart, they developed a slick and harmonious sound that was atypical for Nashville at the time.  The Browns would enter that strange place that we have seen a few country artists foray into, where they have a country/pop sound, but leans more towards the latter.  Sometimes I wonder if acts like this never had country hits leading up to their crossover success, would these songs have ever made the country chart at all?[2]

Either way, the Browns did go to the top of both charts from a song that was originally a French song, “Les Trois Cloches” and was given English lyrics in 1948 but was not a hit in English until the Browns got a hold of it.[3]  The group, who also had folk elements in their music and a real capture of small town U.S.A., which totally worked in late 50’s America where family values meant a lot, especially when done by a clean cut family act like the Browns.

After “The Three Bells”, the group would have some more hits on the country chart bit would disband in 1967 after Jim Ed’s solo career took off and he would place on the top twenty on the country and western chart thirteen times.

[1] I just did one of those stupid puns I am not fond of regarding last names.  One of my least favorite ones was when the Minnesota Vikings drafted Quarterback, Christian Ponder and when they were thinking about inserting him as the starter, headlines all around the sports sites were that the Vikings were “pondering” a change at Quarterback.
[2] A great example of this are the Eagles, who are considered one of the best at fusing Rock and Country but only made the top ten of the country and western chart once with Lyin’ Eyes in 1978 when it went to #8.
[3] Edith Piaf had a hit with it in France in 1953.  Wait, did I just reference Edith Piaf a second time in this anthology?
Tagged under
Tweet

More in this category: « A Big Hunk O' Love Sleepwalk »