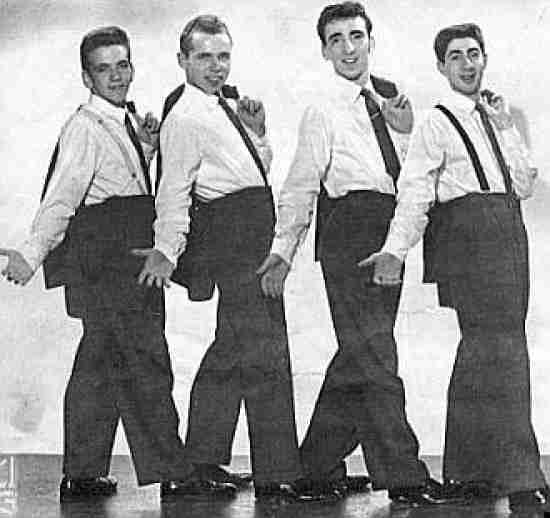 
The musical landscape had changed so much in the past three years but the gaps between the new popular genres still was not that far apart. It was logical to think that you could draw from the best of what was going around you and amalgamate it and make a perfect record, or at least one that was right for the time. That is what Danny & The Juniors accomplished in 1958, though their specific formula for success was short lived.

That might be why when I look at every song that I have talked about thus far, “At the Hop” just feels more like the 50’s than any other song I have talked about so far. It has always been a song, and for that matter the other hits that Danny & The Juniors had that fits that era better than anything else. It doesn’t age well, but it remains just as fun and irreverent as it was back then. How perfect that it was done by a group of people still in High School.

The whole story of Danny & the Juniors plays like a 50’s cliché. You have the flashy lead singer, the quiet but talented songwriter, two other interchangeable parts, an overall brief career, an eventual splintering and a tragic ending. Originally called the Juvenairs, the Philadelphia group was led by Danny Rapp, who was the lead tenor and the one who developed the dance moves for their performances, but the talent was with Dave White, who wrote a song for the group called “Do the Bop”, which would become the foundation for what was to become their greatest hit.

The Juvenairs began performing at local record hops where they were discovered by a local talent agent named John Madara who hooked them up with Artie Singer, the owner of a small label called Singular Records.

As the story goes, Dick Clark, who at this point was hosting American Bandstand, which by this point was the most influential music program in the country, suggested that the title was changed to “At the Hop”, and the lyrics were altered accordingly. That story is a little murky, as it has been often stated that the lyric change came from Singer, but isn’t it a better story to say that it came from Clark, and if Dick got the credit, wouldn’t he want the group on his show more often?

The “Bop” at the time was a fading dance craze and this slight alteration made all the difference as the song immediately became more current.[1] Now called Danny & The Juniors, the group appeared as a last minute replacement on Bandstand, and the record became a smash immediately in Philadelphia, and following cash strapped Singular’s release of the song to the much larger ABC Paramount, it became a national sensation.

Logically, at the time this is a song that couldn’t miss. It combined the successful doo-wop formula in a faster rock and roll fashion, it used the popular (and later to be called) 50’s Chord Progression, and it was rooted in the twelve bar blues. It had a boogie woogie feel, it moved fast, and it was presented by four good looking kids with Dick Clark’s approval; a factor that was very important at the time.

This would not be their only hit, but would be their only number one. Danny & The Juniors would score with “Rock and Roll is Here to Stay” and “Twistin’ U.S.A.” but by 1962 they had run out of top 100 hits of any kind and they would disband. By the 70’s there were two different versions of the group touring, one led by Rapp and the other by the two spare parts.[2] Rapp would be the tragedy in this story as he committed suicide in 1983, thus completing the 1950’s rock and roll cliché.

As for Dave White, he would continue collaborating with John Madara where they would write a few hits for other acts, the most famous being Lesley Gore’s number 2 hit “You Don’t Own Me” and they would have a minor hit themselves as the Spokesmen with a song called “Dawn of Correction”, an answer song to the 1965 number one hit, “Eve of Destruction” by Barry McGuire.

Their run may not have been long, but the group, most specifically “At the Hop” does have a lasting legacy and was a featured song in American Graffiti, almost cementing it as an iconic 1950’s song.[3] That itself gives them a very important place in Rock and Roll history, which as we have seen not every number one song can state.

In a final piece of interesting history with the group, they hired a saxophonist named Lennie Baker who would become one of the founding members of Sha-Na-Na, who would actually perform “At the Hop” as the fifth act at the Woodstock concert.[4]

Not exactly something you would associate with Hendrix playing the Star Spangled Banner is it?[5]


[1] Though this was true for only a time. When was the last time you went the “Hop”?
[2] I suppose I should at least give their names: Frank Maffei & Joe Terranova.
[3] Seriously, every song in that movie was perfectly chosen.
[4] Remember when I said in a previous footnote that Sha-Na-Na was never cool? When I was seven, I thought they were (maybe it was Happy Days residual) and Lennie was easily my favorite.
[5] Even more bizarre, Hendrix once opened for the Monkees.
[6] I still can’t believe that this song did not go to number one.
Tagged under
Tweet