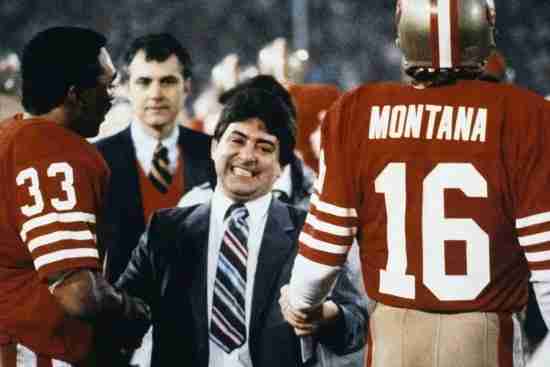 
Chairman:  Generally, we don’t rank owners on our lists, and there is one basic reason for it.  It’s boring.

Spheniscus, I don’t claim to know much about Edward DeBartolo Jr., the former owner of the San Francisco 49ers beyond a few basic things.  In the twenty-three years he owned the team, they were one of the elite franchises in the NFL and under his watch, they won five Super Bowls.

He has been a finalist for the past three years and sure enough he got in, to the surprise of not a whole hell of a lot of people and to the fanfare of nobody out of the Bay Area.

The Niners were clearly not better off for him being forced out, and on fan blogs I have seen, he appears to be missed as the owner of the team.

That seems like the only things we need to know right as to why he got in right?

Spheniscus: Isn’t he really the original Robert Kraft? Took over a moribund franchise. Found a transcendent quarterback, hired a transcendent coach, and went on a run that was unmatched for sustained excellence until the Patriots came along in the 2000s.

Then after winning again with a new legendary quarterback he gets forced out and the Niners, with the small resurgence of a couple of years ago, have been largely terrible ever since.
If that is not a sign if greatness as an owner, I’m not sure what is. I’m not really sure how else we could measure it.

Chairman:  By that measurement he should have been a lock years agoi, but if Kraft follows his path, does that mean some incompetent relatives are going to force him out and the Pats are going to revert to 1970 levels of suckitude?

Possibly with the Super Bowl being in San Francisco would give the locals something to cheer for after losing half of their team to retirement and overall apathy.

The more I think about it, he should have gotten in a couple of years ago.

Spheniscus: The 1970s Pats weren’t terrible (I’m told, seeing as I wasn’t there). The roughing the passer call on Ray “Sugar Bear” Hamilton against the Raiders in 1976 Divisional Playoffs in is still talked about around here like Raiders fans talk about the Tuck Rule. This is the play, call it yourself…

But I understand what you are saying. We just have to hope that Brady is still good for the next seven years. Or that Jimmy G is the next Steve Young.

But back to DeBartolo… looking at it, I think that it will likely be his year as well. Particularly with only an up or down vote necessary. They just started this contributor spot a few years ago and the backlog is so great, I doubt they are going to give a down vote this early in the process. And I think he deserves it.

More in this category: « A look at Tony Dungy's PFHOF induction A look at Don Coryell's PFHOF snub »